CHINA has marked the final days of 2013 by opening a number of high-speed lines in various parts of the country totalling 1501km. 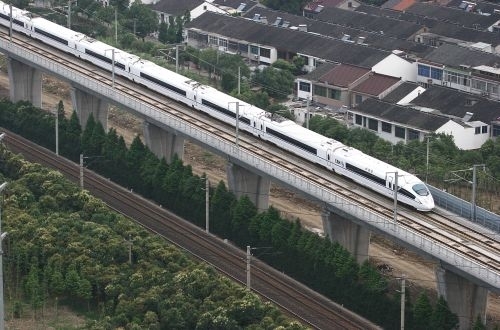 The southeastern coastal high-speed line from Shanghai via Ningbo, Wenzhou, and Xiamen to Shenzhen has been completed with the opening of the southern 502km section from Xiamen to Shenzhen. The maximum design speed on this corridor is 350km/h north of Ningbo and 250km/h south of there.

The final section of the 2078km east-west high-speed line linking Shanghai, Wuhan and Chengdu was opened on December 28 following the completion of the 264km 200km/h link from Lichuan to Chongqing.

The 455km Zhengzhou - Xi'an high-speed line was extended a further 148km west to Baoji on December 28. These are the first two sections to be completed of a 1363km line with a design speed of 350km/h linking Xuzhou, Zhengzhou, Xi'an and Lanzhou. Construction of the entire line is expected to be finished in 2017.

The Guangxi Coastal Railway in southern China has also been opened. This 261km line, with a maximum design speed of 350km/h, links Nanning, Qinzhou, and Fangchenggang with a branch from Qinzhou to Beihai.

Two other lines opened on December 28: the 103km 250km/h Maoming – Zhanjiang line, and the 223km Liuzhou – Nanning Intercity Railway with a design speed of 250km/h.