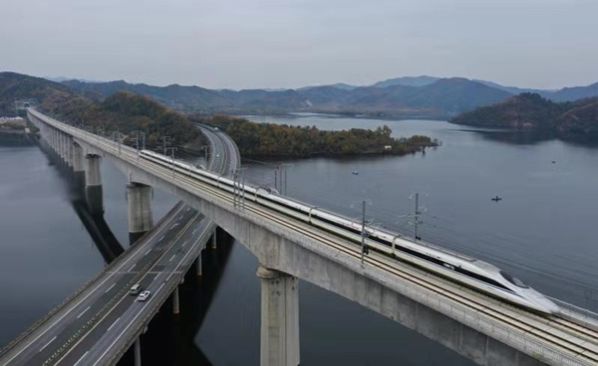 The Wuhan - Shiyan line is 399km long and has a maximum design speed of 350km/h, although trains will be restricted to 300km/h initially. The line runs northwest from Wuhan via Xiaogan, Xiangyang where it intersects another new high-speed line running from Zhenzhou southwest to Wanzhou, and Shiyan in Hubei Province. The initial Wuhan - Xiaogan section incorporates an existing inter-city railway.

CR will initially operate 30 round trips per day between Wuhan and Shiyan with a journey time of 1h 57min. The number of trains per day will be stepped up to 39 in one direction and 40 in the opposite direction when a new timetable is introduced on December 30.

The 235km Rizhao - Qufu section of the Rizhao - Lankao high-speed railway is located in the south of Shandong province and runs due east from Rizhao on the Yellow Sea. The line has six new intermediate stations and a design speed of 350km/h, with an initial operating speed of 300km/h.

CR will operate 14 round trips per day with a fastest journey time of 1h 14min compared with a trip time of 3h 13min by conventional train.

China plans to open 13 sections of high-speed railway before the end of this year.