Nanning - Chongzuo and Mitreya-Mengzi lines both opened this month. 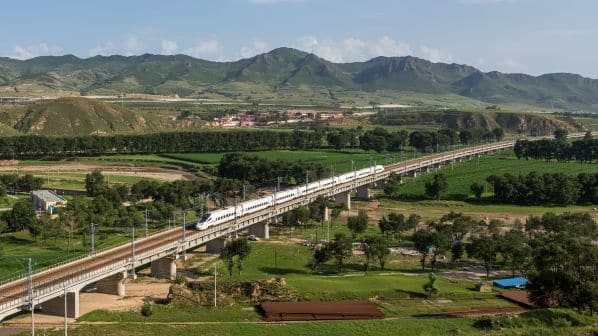 CHINA National Railway (CR) has announced the opening this month of two new high-speed lines from Nanning, capital of the Guangxi region.

Due to open first on December 5 was the Nanning - Chongzuo section of the Nanning - Pingxiang high-speed line. This is 121km long with a design speed of 250km/h, resulting in the journey time from Nanning to Chongzuo now being shortened from 2h 36min to 52 minutes.

There are four new stations on the route: Quijiunan, Wuxu Airport, Fusui South and Chongzuo South.

The Nanning - Pingxiang high-speed line, on which construction began in 2018, is located in the southwest of Guangxi Zhuang Autonomous Region, and will eventually connect Nanning with Pingxiang, a port on the border with Vietnam, giving a total length of 201km. The Chongzuo - Pingxiang section, on which work began in December 2020, is currently still under construction.

The second new line from Nanning, the Mitreya-Mengzi high-speed line, opened on December 15 and runs through the Honghe Hani and Yi Autonomous Prefecture in southeast-central Yunnan Province.

Services on the 106km line, built with a design speed of 250km/h, run south from Nanning on the high-speed line towards Kunming, then branchoff south of Mile station. The new line then passes through Mile City and Kaiyuan City before terminating at Honghe station in Mengzi City.

The new line has been built through a region with complex geology, necessitating the building of numerous bridges and tunnels. Construction of the line began in 2018 and throughout the project expert scientific advice has been sought to help project team overcome the difficulties of the terrain and to ensure the line has been completed on schedule.

Services have begun with an intensive timetable, with the fastest trains reaching Honghe from Kunming South in 69 minutes. Maitreya, Kaiyuan and Mengzi  can be reached within 30 minutes.

China hopes that both of these new lines will open up transport, economic and communication possibilities for people in the regions concerned, promoting a sense of national unity and providing new opportunities for tourism.

It is also hoped that the route will also form an important connection between southwest China and ASEAN Free Trade Area countries and will encourage new industries to develop.