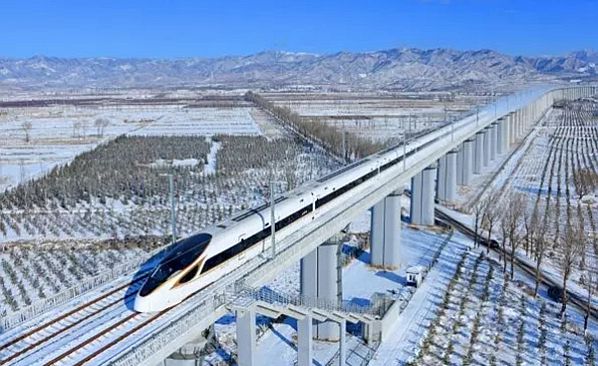 The Beijing – Zhangjiakou line has eight stations including Badaling Great Wall and Xiahuayuan North, where the 52.2km Chongli high-speed line branches off to serve the Olympic Village in Prince Edward City. Badaling Great Wall station is underground and has a maximum depth of 102m and occupies an area of 41,000m2.

The maximum speed on the Beijing – Zhangjiakou line is 350km/h and will cut the journey time between the two cities from 3h 7min to 47 minutes. The Chongli line has a top speed of 250km/h to achieve a Beijing – Prince Edward City journey time of 53 minutes. CR is operating 36 round trips per day on the two new lines plus six daily round trips in peak hours.

The Beijing - Zhangjiakou line is one China’s eight vertical and eight horizontal high-speed corridors and connects with two new 250km/h lines: the 287km line from Zhangjiakou to Hohhot (the western section of which opened in 2017) and the 141km Zhangjiakou – Datong line. As a result, the Beijing – Hohhot journey time has been cut from 9h 15min to 2h 9min, while the fastest time from Beijing to Datong is now 1h 42min compared with 6 hours before the new line opened.