CRRC Corporation says its CRH2G high-speed train, which has been developed specifically for high-altitude operation, has been approved by China's National Railway Administration enabling the fleet to enter passenger service next month on the 1776km Lanzhou – Xinjiang high-speed line in north west China. 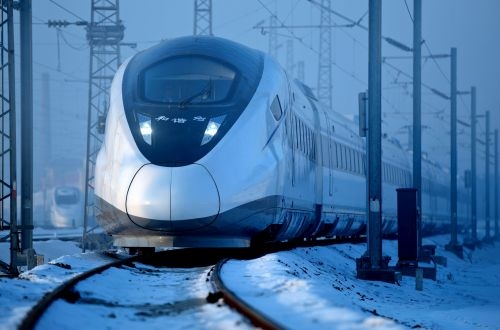 The 250km/h trains are being supplied to China Railway Corporation by CRRC's Qingdao Sifang subsidiary and are designed to operate at up to 3600m above sea level in temperatures ranging from -40 to +40oC as well as sandstorms, high-winds, and intense ultraviolet light.

Bogies have been adapted to prevent frost, snow, and ice accumulation while the sealed bodyshell reduces the risk of failures caused by condensing meltwater. Underfloor equipment cabinets are pressure-sealed to minimise sand and dust ingress and a sediment control ventilation system ensures onboard air quality is maintained.

Electrical equipment has been configured to minimise the risk of damage from lightning strikes and CRRC says protective film on the windows reduces UV penetration to less than 1%.

Development of the CRH2G has taken around three years, a process which included testing one of the driving vehicles in the Rail Tec Arsenal climatic chamber in Vienna.

Each 201.4m-long eight-car train seats 613 passengers including 48 in first class.