CONSTRUCTION has formally begun on the 225km Phase One of Britain’s High Speed 2 (HS2) project from London to Birmingham and Lichfield. 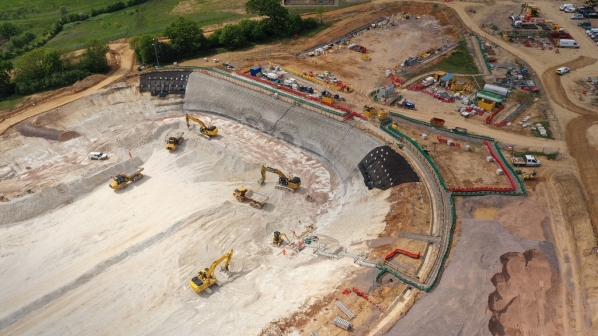 HS2 Phase One will run pass through more than 50km of tunnels and over 16km of viaducts.

The Department for Transport (DfT) gave approval on April 15 for HS2 Ltd, the state-owned company implementing the project, to issue Notice to Proceed (NtP) to the four Main Works Civils Contractors (MWCCs) working on Phase One to commence with full detailed design and construction of the section from London to the West Midlands.

The MWCCs have now moved from enabling works, scheme design and preparatory work to full construction of the line.

Phase One will run pass through more than 50km of tunnels and over 16km of viaducts. The project has a funding envelope of £35bn-45bn and will open between 2029 and 2033.

Phase 2a will run between Fradley in the West Midlands and Crewe in Cheshire, where it will connect with existing high-speed services. Phase 2b will form a Y shape, with an eastern and a western leg. The western leg will connect to the high speed lines at Crewe and run through to Manchester, while the eastern leg will connect to high speed lines in the West Midlands and run through to Leeds. Services will also travel to other destinations on the conventional network, including Glasgow, Liverpool, Preston and Wigan.

The project is designed to provide a dedicated corridor for inter-city services, creating more capacity on the conventional network for freight and commuter services.

Five bids have been submitted for a £2.75bn contract to supply at least 54 360km/h trains for phase One.

HS2 is currently inviting bids for a £500m power supply contract and launched the procurement for signalling and train control, and slab track systems in May.

Four joint ventures were awarded construction contracts for the project in July 2017:

With costs mounting, the project was facing an uncertain future at the beginning of the year. The Financial Times reported in January that an unpublished draft review of the project led by former HS2 chairman Mr Doug Oakervee found that the project could cost up to £106bn.

However, a report on HS2 published on January 24 by Britain’s National Audit Office (NAO) found that while there was huge uncertainty around the Department for Transport’s (DfT) latest estimate of the cost of HS2, the project will cost between £65bn and £88bn at 2015 prices, between 17% and 58% more than available funding.

Following weeks of speculation, the British government finally reaffirmed its commitment to HS2 in early February ahead of the giving approval for the project in April.

In an address to parliament on February 11, prime minister Mr Boris Johnson criticised past management of the project by HS2 Ltd, which he said has resulted in costs exploding. However, he said this did not detract from the value of the project, which will offer hundreds of thousands of extra seats to move up and down the country as well as integrating with planned local transport improvements.

HS2 Ltd says the start of construction will bring a jobs boom.

BBV JV, HS2’s main works contractor for the West Midlands, along with its supply chain partners, says it expects to be one of the biggest recruiters in the West Midlands over the next two years, with up to 7000 skilled jobs required to complete its section of the HS2 route. The EKFB JV, which is building the section from the Long Itchington Wood site in Warwickshire south to the Chiltern tunnel portals, has said it will recruit to fill more than 4000 roles in the next two years with many based in Milton Keynes as work ramps up in the area.

HS2’s tier one construction partners based in Greater London - SCS JV, BBVS JV, Align JV and Mace Dragados JV - confirmed that they will collectively recruit over 10,000 new jobs as HS2 gears up for major construction. HS2 Ltd is already directly recruiting for 500 new roles over the next three months, with the majority based in Birmingham, as the project moves into the construction phase.

“HS2 is at the heart of our plans to build back better, and with construction now formally underway, it’s set to create around 22,000 new jobs,” Johnson says. “As the spine of our country’s transport network, the project will be vital in boosting connectivity between our towns and cities. But HS2’s transformational potential goes even further. By creating hundreds of apprenticeships and thousands of skilled jobs, HS2 will fire up economic growth and help to rebalance opportunity across this country for years to come.”

“Today marks a major milestone in this government’s ambitions to build back better from Covid-19,” says transport secretary, Mr Grant Shapps. “Shovels in the ground to deliver this new railway means thousands of jobs building the future of our country’s infrastructure.”

“This is a hugely exciting moment in the progress of HS2,” says Mr Mark Thurston, CEO of HS2 Ltd. “After 10 years of development and preparatory work, today we can formally announce the start of full construction, unlocking thousands of jobs and supply chain opportunities across the project.

“We are already seeing the benefits that building HS2 is bringing to the British economy in the short term, but it’s important to emphasise how transformative the railway will be for our country when operational. With the start of construction, the reality of high speed journeys joining up Britain’s biggest cities in the North and Midlands and using that connectivity to help level up the country has just moved a step closer.”