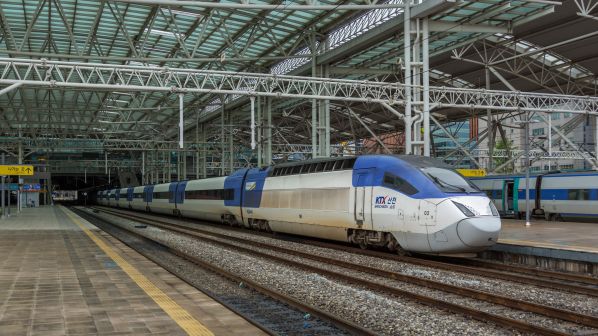 Construction of the 260km/h electrified line is expected to cost around Won 2.4 trillion ($US 1.7bn) over six years. When open in late 2027, the line is expected to reduce the journey time between Seoul and Sokcho by 1h 20min to 1h 39min compared with travelling by road.

The line will predominantly run in tunnel, which will reduce the impact on operations of severe weather such as snow, and will have intermediate stations at Hwacheon, Yanggu and Inje-gun.

The Chuncheon - Sokcho line will connect with the north-south Gangneung - Jejin line, also due to open in 2027 as an extension of the line from Pohang, Ulsan, and Busan.

The ceremony in Sokcho, a coastal city 158km northeast of Seoul, was attended by around 400 government and railway officials as well as local residents.

“I have always emphasised fair accessibility as the key to balanced development across regions,” Yoon said at the ceremony, adding that he had campaigned during recent elections on improving transport infrastructure in the Gangwon region, which includes Sokcho and Chuncheon.

“(With the railway), northern Gangwon will mark a new turning point in regional development,” he  said. “Once various transport networks, such as roads and railways, are closely connected, the Gangwon region will experience remarkable growth as a base for tourism and advanced industries.”

Plans for the Chuncheon - Sokcho line were approved in July 2016, the fourth time the business case had been evaluated after being on the backburner for 30 years. At that time, the project was proposed as a 93.9km single-track line costing Won 2.06 trillion.