Completion of the troubled project now expected in June 2023. 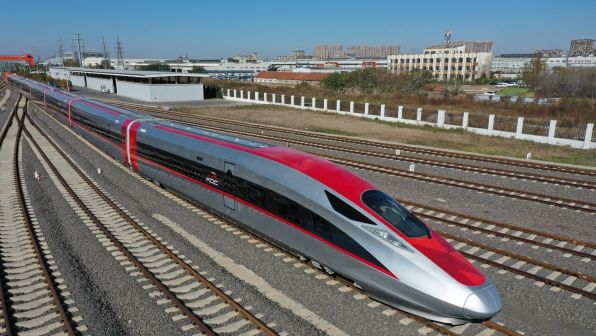 CRRC Qingdao has successfully rolled out the first 350km/h Yawan high-speed train for the 143km Jakarta - Bandung high-speed line, the first time the company has exported its high-speed technology.

The eight-car trains consist of four powered and four trailer cars and each have capacity for 601 passengers.

CRRC Qingdao secured a Yuan 2.51bn ($US 370m) contract for 11 trains in April 2017. However, the Indonesian project has run into difficulties. Cost overruns, land acquisition and technical issues have pushed back the estimated completion date of 2019 when the contract was signed with the Kereta Cepat Indonesia-China (KCIC) consortium in 2015.

KCIC consists of four Indonesian state-owned companies, which hold a 60% stake, and China Railway International and four other Chinese firms, which hold the remaining 40%. PT Kereta Api Indonesia (PT KAI) replaced PT Wika as the leader of the Indonesian consortium in August 2021.

The line is now expected to enter service in June 2023 with construction reported to be 80% complete. Tracklaying got underway in April. Indonesia has also pledged to provide state funds to meet the increased cost of the project, which now stands at $US 8bn compared with $US 6.07bn when the project was launched. According to PT KAI, Commission VI of the Indonesian House of Representatives agreed to an additional Rupiah 4.1 trillion ($US 280m) capital injection for fiscal year 2023 on August 3 to complete the project.

The Indonesian and Chinese governments pledged to speed up construction of the project last month. The scheme is considered a flagship project in China’s Belt and Road Initiative (BRI).