GERMAN Rail (DB) has admitted its plans to launch ICE high-speed services from London to Cologne and Frankfurt are now seriously delayed, and the service is unlikely to be launched before the end of the decade. 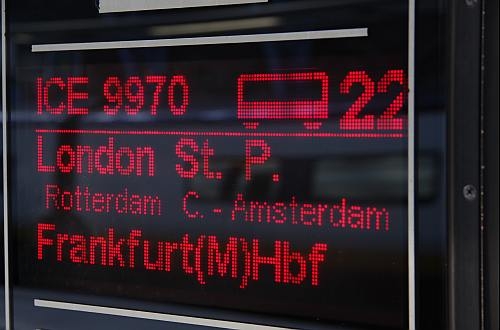 The class 407s were originally due to enter service in December 2011 but certification delays meant the trains did not enter service in Germany until December 2013 and they are still not approved for use in either France or Belgium - this approval work is underway and is likely to be completed by next year.

Siemens has confirmed to IRJ previously that DB has not yet ordered the additional safety equipment, including fire protection and underfloor fire extinguishers, required for operation in the Channel Tunnel. As the programme to fit this equipment and gain approval for operation is likely to take two years, the earliest services could start would be 2018.

DB is now reportedly planning to concentrate on developing existing services from Frankfurt to Paris and Brussels. Media reports in France suggest DB is planning to use the new trains between Brussels and Paris in competition with Thalys.

On October 19 2010 DB sent one of its earlier international ICE3M sets to London's St Pancras International station, where it was exhibited to the press and invited guests . Evacuation tests using two class 406 ICEs were also conducted in the Channel Tunnel in October 2010.