APPROVAL inspections of German Rail's (DB) next generation ICx long-distance train are being carried out by DB Systemtechnik on behalf of manufacturer Siemens. 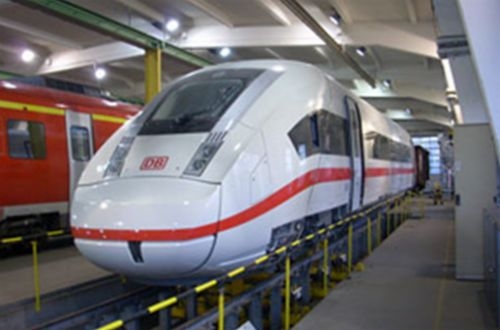 A driving car underwent climatic testing in the test chamber at DB's Minden test centre in February to analyse the performance of air conditioning in the driver's cab and various other subsystems. Further vehicles were subjected to inspections focussing on measures to prevent derailment.

DB signed a framework contract with Siemens in May 2011 for up to 300 ICx trains, placing an initial firm order for 130 sets, with an additional 90 trains planned and an option for a further 80 trains, which can be exercised at any time until 2030.

In 2013 DB revised the specification for the fleet with an improved interior and increasing the 10-car trains to 12 vehicles.

The first batch of 230km/h trains comprises 85 12-car and 45 seven-car sets, which will replace locomotive-hauled trains.

The first incremental speed tests for the 12-car train are planned for August and up to four trains will be used for certification runs. Limited trial operation with passengers is expected to begin in mid-2016 with full service introduction of the 12-car trains scheduled for December 2017. The seven-car trains are due to enter service from 2020 onwards.