Manufacturers will work independently to develop fleet for the 2030s. 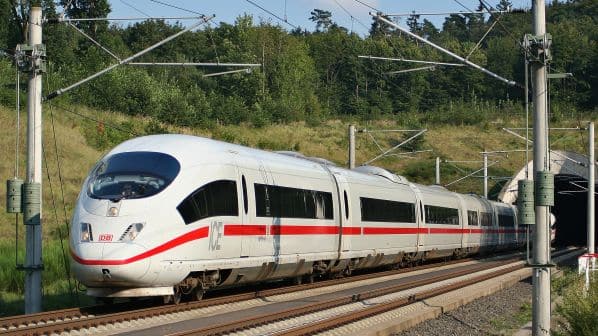 DB is aiming to develop a new generation of high-speed trains for use on the DB network from the early 2030s, replacing older ICE 3 trains, as seen here.
Photo Credit: Sebastian Terfloth/Wikipedia Commons

GERMAN Rail (DB) is looking ahead to the design of its high-speed train fleet for the 2030s by appointing manufacturers Siemens and Alstom to work independently on developing concepts for the next generation of trains.

This follows an initial call for tenders for the development of the new generation of trains, and DB itself will be contributing its expertise of operating one of the world’s largest high-speed fleets.

Once concepts for the new trains have been developed, tenders will be called during the second half of 2023 for the development, construction and certification of the new fleet, which will be open to other manufacturers.

The resulting new generation of trains will be deployed on the DB network from the early 2030s, replacing older ICE 3 trains dating from the 1990s and increasing the size of the high-speed fleet to meet expected growth in passenger numbers.

To achieve its aims of making rail travel more attractive, comfortable and convenient and doubling the number of passengers using long-distance rail by 2030, DB intends to continue to order single-deck high-speed trains that are 400m long, have seating capacity for 950 passengers and have a maximum speed of at least 350km/h. The operator also says that the new trains should set high standards of energy efficiency and fault-free operation.

Welcoming the initiative, Siemens Mobility said that “through the holistic approach of this partnership, the specific needs of the operator as well as passengers will be aligned with state-of-the art technologies.”

“Even the form of cooperation is forward-looking,” says CEO of rolling stock at Siemens Mobility, Mr Albrecht Neumann. “Rather than delivering a specific catalogue of requirements, the most important features of the new generation of ICE trains will be developed in close cooperation with the customer.”

For its part, Alstom said that more than 100 of its engineers specialising in high-speed trains would be involved in the concept design work in conjunction with DB.

The team will largely consist of employees from Alstom’s site at Hennigsdorf which has specialised in developing high-speed trains for the German and international markets. The company’s French sites at La Rochelle and Saint-Ouen will contribute their extensive experience to the project.

Alstom points out that it has taken part in a similar innovation partnership with French Railways (SNCF) to develop its next generation of TGV trains.

“We are very much looking forward to developing a concept for the new ICE generation together with DB,” says president of the DACH region at Alstom, Mr Müslüm Yakisan. “In Germany we have tremendous development expertise, also and especially in the high-speed sector, and we know the German market very well.”