A Renfe class 730 train derailed on July 24 on the approach to Santiago de Compostela leaving around 80 dead and dozens injured. The train left the tracks entirely at 20.41 on a curve 4km south of Santiago station, where it was due to call. 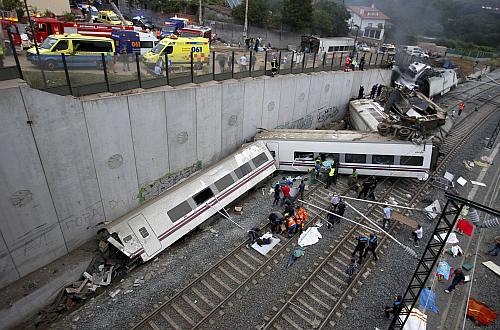 The train was the 15.00 service from Madrid Charmatín to Ferrol in Spain's northwestern province of Galicia. According to Renfe, the eight-car train was carrying 218 passengers plus crew.

The section where the accident occurred is the final stretch of the 87.5km Ourense - Santiago high-speed line which opened in December 2011, and was designed for a maximum speed of 300km/h, but with an 80km/h restriction on the final section.

The broad-gauge line is electrified at 3kV dc, as it is currently an operational island severed from the rest of the standard-gauge high-speed network until the completion of the line from Ourense to Medina del Campo, which is scheduled for the end of the decade.

The wayside block system along the entire line is based on ETCS Level 1, while the final section near Santiago, where the line joins the conventional railway, is fitted with the national Asfa system, which is an automatic brake and signal warning system designed to restrict speeds only at associated signals. Initial reports suggest that the accident took place in the transition zone between the two systems.

The 15 Renfe class 730 trains were manufactured by Talgo and Bombardier between 2009 and 2011 and certified to operate at up to 220km/h. They are dual voltage (25kV ac/3kV dc) and are fitted with variable gauge equipment, like the class 130 trains from which they were converted to bi-mode (electric/diesel) operation, capable of running at 250km/h on electrified high-speed lines and operating independently over non-electrified lines.

They entered service on Madrid - Galicia routes in June 2012. The trains operate on the 25kV ac standard-gauge high-speed line between Madrid and Olmedo, where they switch to broad-gauge and are powered by their two diesel generators over the conventional line to Ourense, where they raise their pantographs again to use the 3kV dc electrification.