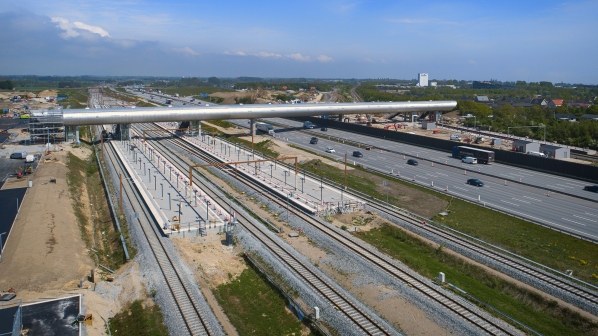 The inauguration was celebrated with a day of free rides along the 60km line, with full operation due to begin on June 1.

Construction of the DKr 10bn ($US 1.4bn) line began in 2010, and Danish infrastructure manager Banedanmark began tracklaying on October 28 2016.

The line is designed to improve connections around Zealand and the rest of Denmark, while also reducing congestion on the parallel Copenhagen - Roskilde line.

The line was due to operate with ETCS Level 2, but has been equipped with a legacy signalling system due to delays in the national rollout of ETCS.

A joint-venture between Atkins, Vössing, EKJ and Sweco was awarded a DKr 200m railway technical contract for the line, which has ballasted tracks and is designed for mixed operation.

“The station will be a new gateway to Copenhagen and an important step on the road for the approximately 8000 daily users that the station gets in the long term,” says project director, Ms Jette Aagaard. “With its spectacular design, the station’s 225m-long footbridge will not only be a landmark for the new railway and for Køge, but also a significant landmark for green mobility.”

The station will be used by regional trains, while inter-city trains will also begin to use the station from 2021.