HS1 Ltd, the owner and infrastructure manager of the high-speed link between London St Pancras and the Channel Tunnel, says it is in discussions with Eurotunnel, SNCF Network and Lisea about introducing direct London - Bordeaux high-speed services. 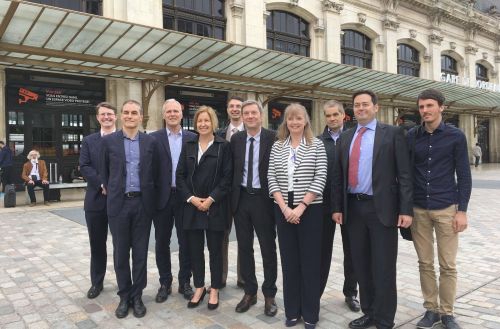 Officials from the four infrastructure managers responsible for the proposed London - Bordeaux route.

The four infrastructure managers responsible for the route, which would see high-speed trains bypass Paris and use the 302km Sud Europ Atlantique high-speed line between Tours and Bordeaux, which opened in July 2017, met in Bordeaux on April 25. They discussed potential departure slots, cooperation with relevant authorities and train paths as well as redeveloping Bordeaux Saint-Jean station to support international services.

The proposed service would offer a direct journey time of less than five hours, and it is hoped that the advanced planning currently underway would enable a train operator to introduce a service within a couple of years.

“This is the first time that railway [infrastructure managers] have collaborated in this way and it saves the train operator having to do a lot of the legwork,” says Ms Dyan Crowther, chief executive of HS1 Ltd. “The route is almost ready for a train operator to turn up and turn the key as soon as the British and French governments agree on border controls. With the right commitment, we could be looking at new services in the next couple of years.”

Around 1.2 million people currently travel between London and Bordeaux by air every year. HS1 Ltd says it is also working with infrastructure managers and operators on introducing direct services to other European destinations, including Frankfurt and Geneva.

“As we’ve seen with the recent introduction of the Eurostar London - Amsterdam service, there’s a real demand for international train services to provide a comfortable and better-connected service, especially for leisure journeys,” Crowther says.