A dispute has arisen between NTV, Italy's new open-access high-speed operator, and infrastructure manager Italian Rail Network (RFI) over access to platform 15 at Rome Ostiense station, which is used by NTV's Italo trains. 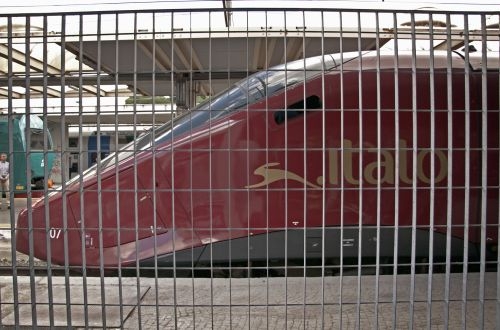 Passengers have been forced to make a 5-minute detour to reach platform 15 from NTV's new service centre, the station's former air terminal, to board their train. This is because RFI has built a 2m high fence on the platform, which RFI says no longer has the role of a platform.

The origin of the dispute is the sale of the air terminal by RFI in December 2008 to a company called Geal. RFI says that the contract of sale clearly specified that in order to meet railway safety rules the buyer of the area had to immediately separate the railway infrastructure from the air terminal, which has now been converted in a new passenger lounge for NTV. RFI says the land that was sold is in a very built up area and lost its "open to the public railway space" function a long time ago. As the original purchaser of the area failed to abide by the law, RFI erected the fence to correctly define the areas.

It appears that RFI erected the fence just a few days before the inauguration of "Casa Italo," NTV's new hub at Ostiense. NTV's president Mr Luca Cordero di Montezemolo and his partner Mr Diego Della Valle have described RFI's behaviour as outrageous. The dispute will now be investigated by the office of regulation of rail services, which has received a letter of complaint from NTV.