THE conclusions of a feasibility study into a high-speed line linking Dresden and Prague were presented on January 14 by Saxony's state transport minister Mr Martin Dulig. 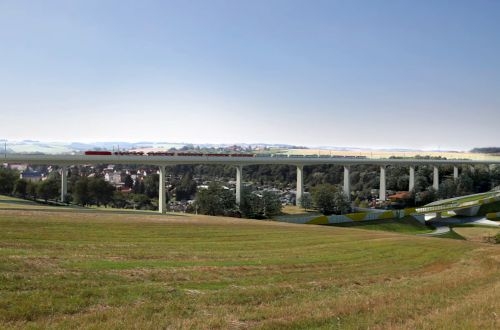 In July 2014 the European Commission agreed to cover half of the cost of a €1.26m feasibility study into a new line, which would drastically reduce journey times for passenger services while providing additional capacity on this busy international freight artery.

The aim of the study was to develop the preferred route option, which had already been selected, and evaluate of geological and hydrological aspects of the project. The state of Saxony and the Czech Ministry of Transport have been developing the project with the aid of Czech and German consultants, infrastructure managers DB Networks and SŽDC, Freiberg Technical University, and Saxony's State Office for the Environment, Agriculture, and Geology.

The existing line between Dresden and Prague follows the River Elbe through the mountainous border region between the two countries and the sinuous nature of the route means journey times between the two cities are slow. The line is also vulnerable to flooding where it runs alongside the Elbe.

The new alignment will diverge from the existing Dresden - Ústi nad Labem – Prague line at Heidenau south of Dresden, immediately entering the 1km Heidenau Tunnel before crossing the 1.04km-long Seidewitz viaduct. The main engineering feature of the line will be the 26km Erzgebirge Tunnel, which will straddle the border between Germany and the Czech Republic. The line will emerge from the tunnel at Chlumec, where there will be a link to the conventional network, before continuing into Ústi nad Labem.

The Heidenau - Ústi nad Labem section will be 43km long and designed for mixed traffic operation with loops for freight trains and a maximum line speed of 200km/h for passenger trains.

From Ústi nad Labem the line will cross the Elbe on a new bridge, which will be constructed alongside the existing rail bridge, before continuing south past Litomĕřice and roughly following the route of the D8 highway towards Prague. This section of the route will be 80km long and designed for operation at up to 350km/h.

The new line is expected to reduce the Dresden - Prague journey time from 2h 15min to just 50 minutes.

"The new high-speed line is a long-term and forward-looking project within the Trans European Transport (TEN-T) network, which is why it is important to start planning early," Dulig says. "Previous experience with major projects shows that it is extremely important to involve all stakeholders and the earliest opportunity while ensuring the highest level of transparency in planning. The excellent close co-operation of our Czech partners and the support of the EU have proved extremely useful so far."

Saxony is now planning more detailed studies and is seeking inclusion of the project in the German government's Federal Transport Infrastructure Plan (BVWP). In support of its application, Saxony plans to submit the results of the latest study to the Federal Ministry of Transport and Digital Infrastructure in the near future.