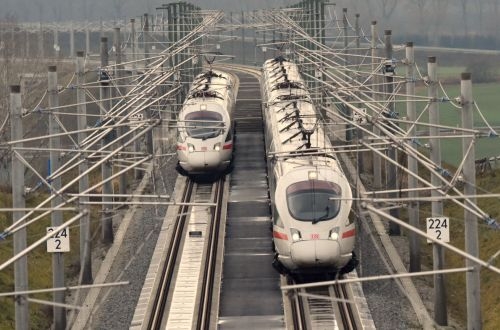 Commissioning was completed on December 8, when a safety certificate was granted by the Federal Railway Authority (EBA) authorising passenger operation. Commercial services will begin operating over the 123km line on December 13, reducing Erfurt – Dresden journey times by 40 minutes to 1h 50 min, and Erfurt – Berlin by 45 minutes to 1h 45min.

The ETCS-equipped line is designed for 300km/h operation and has three tunnels totalling 15.4km and six viaducts totalling 14.4km. The largest structure on the line is the €150m Saale-Ester viaduct which at 8.1km is the longest bridge in Germany. Slab track is used along the entire length of the line and around 34,000 concrete track slabs have been cast for the project.

Munich - Berlin journey times will be reduced to less than four hours at the end of 2017 with the opening of the adjoining 107km high-speed line from Ebensfeld near Bamberg to Erfurt.