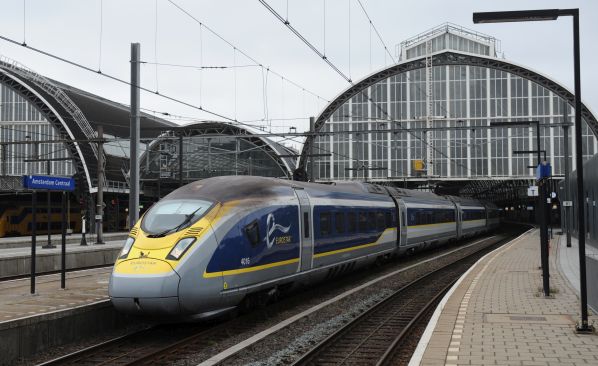 Eurostar plans to operate two London - Amsterdam round trips per day departing London St Pancras at 08.16 and 17.16 and returning from Amsterdam at 07.47 and 16.47. The Amsterdam - London journey time will be 4h 9min, compared with a current best time of 5h 50min with a 1h 44min connection in Brussels. The journey time from Rotterdam to London will take just 3h 29min. All trains will stop at Brussels Midi.

Tickets for the new direct service will go on sale on September 1 with all tickets exchangeable free of charge up to 14 days before departure.

The introduction of through services between the Netherlands and London has been made possible by updating a 1993 agreement between Britain, France and Belgium to include the Netherlands. The new treaty, which was signed by the four countries in Brussels on July 7, allows checks to be carried out by border officials from the departure and arrival countries prior to departure. As a result, British Border Force officials will be stationed in Amsterdam and Rotterdam, where they will check passports and travel documents before passengers board, as they already do in France and Belgium.

Onboard catering services, which were withdrawn at the start of the coronavirus pandemic, will resume on September 7.