Debt and impact of post-Brexit immigration controls to blame. 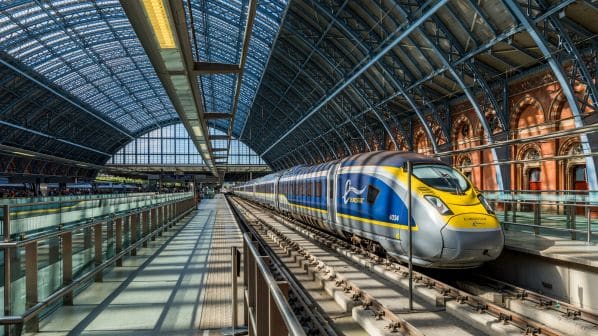 EUROSTAR Group CEO, Mr Jacques Damas, has revealed that the high-speed operator has been forced to concentrate on its core routes from London to Paris and Brussels to maximise revenue as capacity has been limited by post-Brexit immigration controls.

“We are having to focus services on those core routes which make the maximum contribution per train and to charge higher prices to our customers,” says Damas, replying to a letter from Mr Huw Merriman, a British member of parliament and chair of the Commons Transport Committee. “The whole focus of this effort is to manage and reduce the debts we had to incur.”

Merriman had asked Damas to provide details of the “operational challenges” that had resulted in Eurostar deciding not to resume calling at Ashford International and Ebbsfleet International in 2022 or 2023, stops at these stations having been withdrawn as result of the Covid-19 pandemic.

Eurostar has also announced that it will not be restoring the direct service from London to Marne-la-Vallée for Disneyland Paris in summer 2023.

Damas says the decision to focus on its core routes is driven in the short term by two main factors.

The first is that Eurostar must continue to meet “the demanding financial ratios” that underpin the £500m of commercial debt that the company was forced to raise “in order to survive,” its revenue having been cut by 95% for 15 months in 2020-21 due to the pandemic.

Damas notes that this commercial debt comes at “considerably higher cost” than the loan facility offered to its airline competitors, which received £7bn in state aid during the pandemic, and was raised after Eurostar’s shareholders had already put £250m into the business. This was “almost double the total historic amount ever taken out in dividends,” according to Damas.

The second factor in the decision to focus on core routes is the significant increase in the time required for British nationals, representing 40% of Eurostar’s customers, to complete border checks when leaving and entering the Schengen area.

Since Brexit, the stamping of British passports by continental police adds at least 15 seconds to the time taken for a passenger to complete border formalities, says Damas.

He reports that Eurostar has upgraded the French passport gates at London St Pancras and more British gates are now being provided at Paris Gare du Nord, but peak capacity through these stations is around 30% lower than pre-Brexit.

With all booths manned, St Pancras can currently process a maximum of 1500 passengers per hour compared with 2200 in 2019.

“It is only the fact that Eurostar has capacity-limited trains and significantly reduced its timetable from 2019 levels that we are not seeing daily queues in the centre of London similar to those experienced in the Channel ports,” Damas says.

“This situation has obvious commercial consequences and is not sustainable in the mid to long term. The immediate consequence is that we are currently not able to respond to the high demand on our core routes linking capital cities.”

Reopening intermediate stations such as Ashford and Ebbsfleet, “where demand and yields are much lower,” would exacerbate the situation as it would move vital border police resources away from London.

Damas says that one police officer checks five to 10 times more passengers in Eurostar’s main terminals than at intermediate stations.

The Eurostar Group CEO also provides details of “another internal and temporary challenge,” namely a shortage of maintenance engineers at its main rolling stock depot at Temple Mills in east London.

This means that Eurostar trains have not always been prepared in time for departure from St Pancras, causing delays “with day-long knock-on effects.”

“Eurostar did not make any operational staff redundant during the pandemic but we were struggling to replace those who left and this has resulted in a numbers and skills gap,” Damas says. Over 40 engineers have been recruited since the spring.

This shortage would normally have forced Eurostar to reduce its timetable, but Damas says that this has not been the case because of the tighter restrictions imposed by border constraints on Eurostar operations.

Damas also says that Eurostar has declined to offer any near-term prospect of reviewing the decision to focus on its core routes as these pressures are not abating.

“The pandemic has certainly abated, but the risk remains,” he says, noting the uncertainty over the Schengen Area Entry/Exit System (EES) which is due to be in place by May 2023.

“We cannot yet reasonably predict how both business and leisure markets will respond to the various structural changes such as the energy crisis and new work from home habits,” Damas says. “There is considerable uncertainty about the ability of customers to pay in the context of the current and forecast pressures on the cost of living.”

At the same time, Eurostar faces nearly £100m in increased inflationary pressures. Damas says this is again more acute in Britain where access charges on High Speed 1 between London and the Channel Tunnel, “already three to four times more expensive per km than its French equivalent,” are now rising almost three times as fast.

Damas says that Eurostar and its fellow high-speed passenger operator Southeastern recently proposed to infrastructure manager HS1 Ltd “a measure to alleviate pressure on charges in the near term using funds already in the system.”

There was no objection from the British government, but “process considerations” tabled by HS1 regulator the Office of Rail and Road (ORR) “have meant that this important initiative has run into the sand.”

As a result, Eurostar and Southeastern can only commit to operating fewer trains next year and into 2025 than they otherwise would have done. Damas says this is of particular concern because the ORR is now starting the Periodic Review that will fix HS1 access charges for the five years from 2025.

“Eurostar believes that unless a different position is taken in that review on the balance between near-term and long-term risks, and unless charges are reduced, then, at best, the business will find itself indefinitely locked into the present position of having to focus on driving high yield from a limited customer and service base.”