EUROSTAR operated its inaugural service between London, Rotterdam and Amsterdam on February 20, an event which outgoing CEO Mr Nicolas Petrovic described as historic for the international high-speed operator as it finally expanded east beyond its core London - Paris/Brussels network. 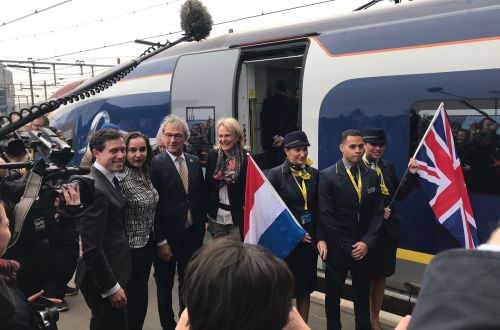 Eurostar CEO Nicolas Petrovic and NS CEO Roger van Boxtel on the platform at Amsterdam after the arrival of the first Eurostar train from London.

The desire to run to Amsterdam has existed for the nearly 24 years that the Channel Tunnel has been in operation. The idea was reinvigorated by Eurostar in 2010 with the announcement of a €1bn investment in its service, including the procurement of a new fleet of 10 Siemens e320 high-speed EMUs, which was followed by an order for another seven sets. However, it took another seven-and-a-half years for the concept to become reality.

“It took time because the service was not ready on the Dutch side, and there were issues with the high-speed line itself," Petrovic told IRJ onboard the inaugural train. "We had to get delivery of our trains, and then we had to certify them. The governments have also had to work out security and border controls. The list is endless. Everyone wanted it to happen, it was just a lot of hard work."

Eurostar will initially operate two direct London - Amsterdam trains per day, beginning on April 4. Passengers on the return journey will be required to use Thalys and change to Eurostar at Brussels, where security checks will take place. This will add around one hour to the journey, a situation which Petrovic admits is not ideal, but is the result of failure to secure an agreement between the British and Dutch governments. It is hoped that this agreement will be reached by the end of 2019, at which point Eurostar expects direct return services will commence.

In the medium-term, there are plans to add a third London - Amsterdam train and Petrovic says Eurostar is open to further expansion, depending on market conditions.
"We will have to discuss the paths and the slots but it's definitely looking good for three and potentially more," Petrovic says. "There is the potential to add more, but let's start, let's get it going."

Mr Roger van Boxtel, CEO of Netherlands' Railways (NS), who greeted the Eurostar train at Amsterdam Centraal station, says work is continuing to prepare Dutch authorities for the expansion of international high-speed operations. For example, he says a lack of police and insufficient funds to train new officers has held the service back.

"The money is now there and they are training more police officers," Van Boxtel says. "By the end of 2019 we will drive directly."

"It is of huge importance on the European level, despite Brexit," Van Boxtel continued. "For people with businesses it is very important that we have smart and fast connections between Britain and the continent. Amsterdam is a fast-growing city and it is good for many businesses that have settled down here and for regular people. To go to London by train now is very comfortable, quick, and very competitive in price."

NS International is providing drivers and onboard staff for the Brussels - Amsterdam leg of the journey under contract with Eurostar, with 20 NS drivers set to be available to operate the service. Van Boxtel says it has no financial interest in the performance of the new service, "or desire to participate" comparing the agreement with the company's relationship with Thalys.

Petrovic says the emphasis for the new service is speed, and the best possible journey time to Amsterdam. However, he was keen to point out that this would not detract from its future offer to Lille "which remains an important market" and that existing services are set for a reorganisation.

"We are entering the market and we want the best journey time to Amsterdam," Petrovic says. "We are not stopping on the way. Maybe later when the market is more established and maybe we are running higher frequencies, then that might be something we consider."

Petrovic expects the new trains to be particularly popular among those travelling to Amsterdam for leisure. He adds that demand from tourists from the United States, China, Brazil and Japan could also be particularly strong, and has not ruled out securing significant patronage from the business market.

"From what I have heard from the business community, many people are interested," Petrovic says. "It is good to bring the two countries closer together. When you have a rail link, it changes the mental map that you have of the world. It is different from flying. It will bring the two centres closer and in the context of Brexit, it is a good symbol. The neighbours are still there and relations are strong. In the medium term it will completely change how people interact between the two countries."

Eurostar had planned to start selling tickets for the new service at 16.00 GMT on February 20, however it was unable to do so, and now plans to start ticket sales on February 22.