THE first e320 train arrived in Brussels on May 23 on a preview trip from London ahead of the entry of these trains on the London - Brussels route on May 28. 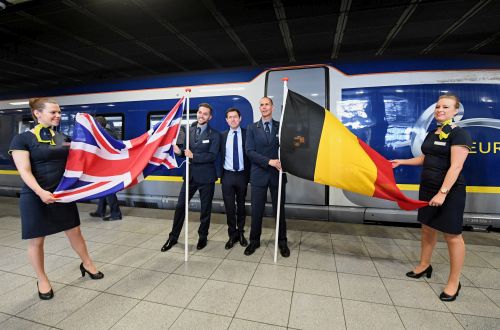 The e320 was first introduced between London and Paris in November 2015. Eurostar has ordered 17 e320 trains, in two batches, from Siemens of which 12 are in service so far. Delivery of the remaining e320s is due to be completed in 2018. The e320 is a 16-car train based on Siemens’ Velaro platform with distributed traction and has 20% more capacity than the original trains supplied Alstom. Designed by Pininfarina, Italy, the e320 has Wi-Fi and can stream 300 hours of entertainment to passengers’ personal devices.

The new trains form part of a £1bn investment programme, which includes the refurbishment of some the original Alstom trains, and improvements to the Eurostar terminals at Brussels Midi and Paris Gare du Nord. Three of the Alstom trains have been refurbished with a fourth due to be completed soon.

An expanded departure area and a more efficient check-in space are being provided at Brussels Midi together with the introduction of facial-recognition e-passport gates for the peak summer holiday period, while a new business lounge has opened in Paris.

The e320 trains will be launched on Eurostar’s new direct service from London to Rotterdam and Amsterdam in December and will be able to serve Ashford in southern England when resignalling work is completed next year.