Ridership target is 30 million passengers a year by 2030. 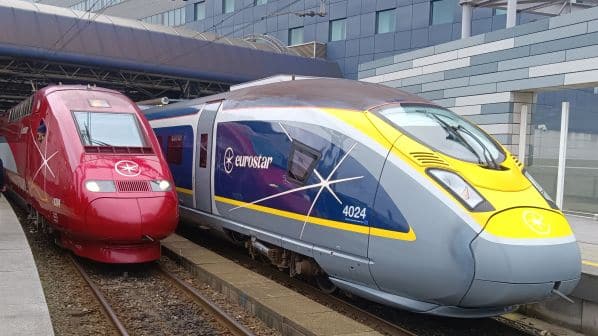 The new Eurostar logo was unveiled at Brussels Midi station on January 24.

THE new brand for the merged Eurostar and Thalys businesses was unveiled in Brussels on January 24 by Eurostar Group CEO, Ms Gwendoline Cazenave, who took up the post in October.

Bringing the two high-speed operators together has created “the backbone of sustainable travel across Europe”, Cazenave said. “With our combined network, customers will have Europe at their fingertips.”

“As we open a new chapter, we need a bigger, single brand,” she said. “We are giving back the star to Eurostar.”

The new brand featuring a star logo “is rooted in our history and our DNA,” Cazenave said, recalling the Étoile du Nord or North Star, the express train that operated between Paris, Brussels and Amsterdam from the 1920s until the start of Thalys high-speed operations in 1996.

Now operating what it says is the largest high-speed network in western Europe, Eurostar Group is aiming to increase traffic from 19 million passengers a year in 2019 before the Covid-19 pandemic to 30 million by 2030.

“Demand is not an issue,” Cazenave says. After the new branding is rolled out this year, Eurostar Group is planning to introduce a single website and app that will enable customers to book to all destinations.

A new commercial offer and customer experience will be gradually rolled out during 2024. Eurostar Group is currently surveying existing and potential customers to better understand their needs.

In 2025 the fleets of 25 Eurostar and 26 Thalys high-speed trains will be merged and a common operating plan introduced. The aim is to deploy the Eurostar fleet on the Thalys network, and particularly in the Netherlands.

Refurbishment of the Thalys fleet is planned, which will see an additional 30 seats installed in each train, increasing capacity by 10%.

To meet its growth targets, Eurostar Group also needs additional capacity at its stations, in particular at London St Pancras and Amsterdam Central at either end of one of the busiest airline routes in Europe, and where Eurostar is growing its market share.

This is the key issue facing the merged business, according to its CEO. “We are still not where we should be in terms of traffic because of station capacity,” Cazenave says. “It takes quite a long time to cross borders.”

Following Britain’s exit from the European Union (EU), passport checks are conducted to leave Britain and passports from outside the Schengen Area must be stamped upon entry.

The impact on passenger processing times and station capacity has forced Eurostar to concentrate on its core routes to Paris, Brussels and Amsterdam, withdrawing seasonal services and no longer calling at Ebbsfleet and Ashford in Britain, as it works to maximise passenger revenue and pay off the debt incurred to keep operating during the pandemic when it lost 90% of turnover.

Station capacity is likely to be further reduced with the introduction of the EU’s Entry/Exit System (EES). Holders of non-EU passports will be required to complete longer in-person checks at the Schengen border.

According to HS1 Ltd, which manages St Pancras as part of the high-speed infrastructure between London and the Channel Tunnel, analysis suggests that processing time will be over 130 seconds per passenger compared with just under 50 seconds at present.

EES was originally due to be introduced this May, but has now been postponed. The European Commission is expected to announce a revised timetable for the programme next month. When it will be introduced is “very difficult to say,” according to Eurostar Group chief safety and stations officer, Mr Simon Lejeune.

One advantage of EES will be that it will remove the need for passports to be stamped when entering Schengen, Lejeune told IRJ. In the meantime, two additional passport control points have been installed in the arrivals lounge at St Pancras, enabling it to provide additional passenger processing capacity.

Over the next few months two more control points will be installed in the departure lounge to complement the existing seven, and two more banks of electronic gates for passport control leaving Britain.

From next month a “biometric fast lane” will be operational at St Pancras, enabling passengers to undertake pre-check in at home and then simultaneously complete both the ticket check and British exit procedures “in an instant” at the station.

At Amsterdam Central, the Eurostar terminal can only handle a total of 225 passengers at a time, a small proportion of the 902 seats available on a Eurostar class 374 train. As a result, trains are leaving Amsterdam “almost empty,” Cazenave says, “and the passengers are complaining.”

Meeting this pent-up demand for high-speed rail travel from the Netherlands to Britain will also require capacity enhancements at Rotterdam Central, where at present only 175 passengers per train can be accommodated.

Lejeune reports that Eurostar is working closely with Netherlands Railways (NS) and infrastructure manager ProRail, and that a site has been identified for a larger terminal at Amsterdam that will offer “a substantial increase in capacity to meet the massive growth potential.”

The new terminal forms part of a major investment programme at Amsterdam Central that is due to start early next year. “We want to do it as soon as possible,” Lejeune says.