EUROSTAR will launch its first direct London - Amsterdam passenger service on April 4, initially offering two trains per day in one direction only. 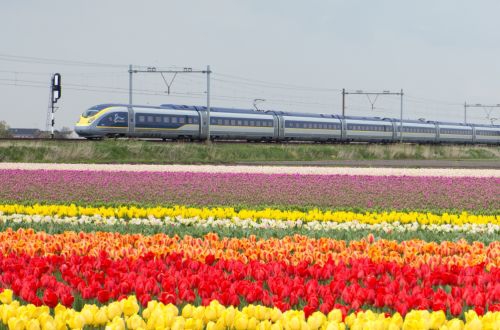 Return passengers will continue to use Thalys services from the Netherlands to connect with Eurostar in Brussels where security checks will take place, adding an extra hour to the journey.

Eurostar says the non-direct return journey is a temporary measure while the British and Dutch governments complete an agreement to enable passport and security checks to be carried out upon departure from the Netherlands. The governments have committed to putting the agreement in place by 2019 while Netherlands Railways (NS) and Eurostar are also in talks to introduce a third service between the two capitals in 2019. The Amsterdam - London service would not set down passengers at Brussels South with boarding only permitted at this station.

The start of services follows an extensive period of testing on the Dutch high-speed network and the construction of Eurostar terminals in Amsterdam and Rotterdam. Ahead of the start of services on April 4, an inaugural service will run on February 20.

Eurostar describes the potential for the new London - Amsterdam service as “significant” and compares the four million annual passengers travelling by air between the two cities with the London - Paris air market at the launch of Eurostar’s service in 1994. It says the market for travel between London and Paris has more than doubled as passenger increasingly choose high-speed rail over the plane.

“Our new route marks the culmination of the extensive investment in high speed rail on both sides of the Channel,” says Eurostar chief executive Mr Nicolas Petrovic. “With a £1 billion investment in our new state-of the art trains and enhanced connectivity on the European network, passengers can now enjoy fast, seamless rail connections between Britain and mainland Europe and a transformed travel experience.”