THE first TGV Duplex train for Morocco's inaugural high-speed line arrived in the country at the port of Tangiers on June 29. 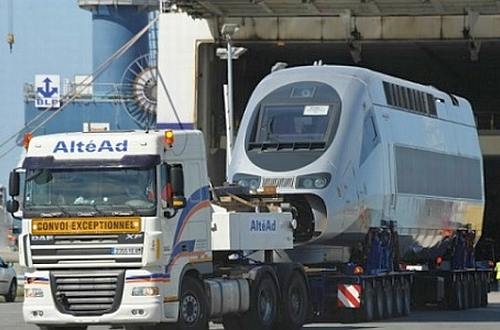 Moroccan National Railways (ONCF) placed a €400m order with Alstom in December 2010 for 14 of the trains, which will be formed of two power cars and eight intermediate trailers, including two first class, five second class and one buffet vehicle. Each double-deck train will seat up to 533 passengers.

Power cars are being assembled at Alstom's Belfort plant in eastern France, with trailers being built at La Rochelle, where completed trains are being tested prior to shipping. The remaining trains will be delivered to Morocco by the end of next year.

The fleet will be maintained by a joint venture between ONCF and French National Railways (SNCF) under an agreement signed in January.

ONCF is constructing a 200km high-speed line from Tangiers to Kenitra, where it will join the existing line to Casablanca, which is being upgraded. Trains will operate at 320km/h on the high-speed line to achieve a Tangiers – Casablanca journey time of 2h 10min, compared with 4h 45min today.

The line was originally due to open this December, but commissioning is now scheduled for 2017. ONCF says construction is now 70% complete and the installation of track, signalling, catenary, and GSM-R is due to begin by the end of the year.