The line initially opens as a broad-gauge route with diesel traction. 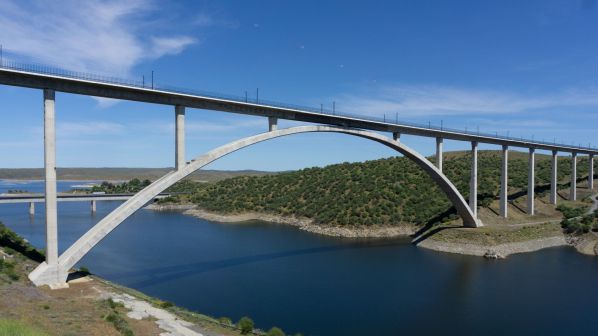 The Almonte viaduct has one of the widest arches of any concrete railway bridge in the world
Photo Credit: Adif AV

THE first section of the high-speed line between Madrid and Extremadura in western Spain has been brought into service by Adif AV, running for 150km from Plasencia to Badajoz on the Portuguese border.

Built at cost of €1.7bn, the first section has been brought into use with broad gauge track, laid on sleepers enabling conversion to standard gauge at a later date. The route is equipped with the national AFSA train protection system for operation at up to 200km/h, and electrification is in progress.

Renfe has deployed refurbished series 730 Alvia trains on the route, increasing the number of services by 17% from 145 to 170 a week.

The journey time between Madrid and Badajoz had been cut by 51 minutes, which Renfe says will enable rail to compete directly with the private car and offer a more sustainable, economical, reliable and comfortable alternative.

The new alignment between Plasencia and Badajoz is mostly double track, with a total of 28 viaducts including at Almonte, which at 384m has one of the widest arches of any concrete railway bridge in the world, according to Adif AV.

The project has included station refurbishment at Plasencia, Cáceres, Mérida and Badajoz, costing a total of €15m and includes work to improve accessibility and integration within the urban fabric.

Adif AV reports that electrification work is at an advanced stage on the 125km section between Plasencia and Peñas Blancas, due to be followed by the 110km stretch from Peñas Blancas to Mérida, Badajoz and the Portuguese border.

Also under construction is an 18km bypass avoiding Mérida station and the city centre, costing €55m. A contract to undertake tracklaying is due to be awarded shortly.

The 437km high-speed line from Madrid to Extremadura has an estimated total cost of €3.7bn.

The Ministry of Transport, Mobility and the Urban Agenda (Mitma) is undertaking studies for the remaining 200km from Madrid to Oropesa while public consultation is underway.

The project to build the high-speed line between Madrid and Extremadura has received a total of €866.1m from the European Union’s European Regional Development Fund, and €35.9m in Trans-European Transport Network (TEN-T) funding.

The Mérida bypass and civil works between Talayuela and Plasencia are receiving €205m in NextGenerationEU funding.