DYNAMIC testing of the first H5 train for the Hokkaido Shinkansen began on December 1, when the 10-car set made a number of runs between Nanae depot and the new Hokuto station in Hakodate, a distance of around 2km. 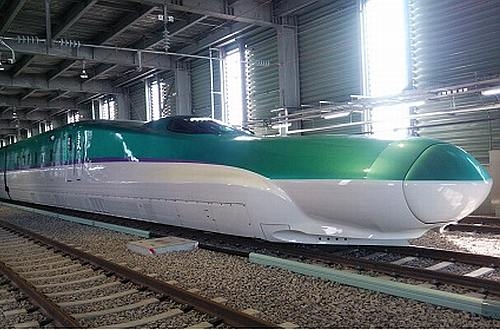 Journalists, local government officials, and around 200 local people greeted the arrival of the train at Hokuto, where a ceremony was held to mark the start of trial operation.

Initial slow-speed testing is focussing on compatibility of signalling and electrification systems. As the testing programme progresses, the maximum operating speed will be stepped up in 30km/h increments.

As part of the test programme the train will undergo trials in the 53km dual-gauge Seikan tunnel, which links Hokkaido with Honshu.

Commercial services are due to begin operating on the 149km Shinkansen line from Shin-Aomori to Hakodate in March 2016. The H5s will operate at up to 260km/h on the new line, although they will be limited to 140km/h in the Seikan tunnel due to fears that shockwaves from high-speed trains could affect the stability of 1067mm-gauge freight trains.

Each 10-car H5 set will seat up to 731 passengers including 18 in Gran Class, 55 in Green Car and 658 in standard-class accommodation.