INTERNATIONAL high-speed services between France and Spain have been suspended since September 29 after heavy rainfall caused severe flooding in the 7km tunnel beneath Girona on the Figueres – Barcelona high-speed line. 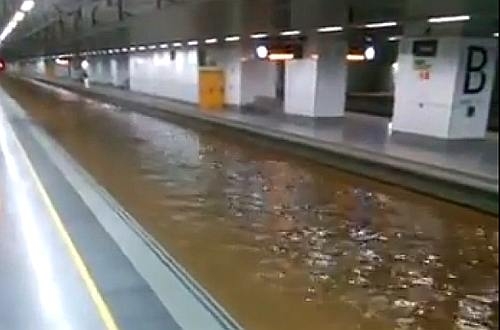 The line will remain closed over the next few days while personnel from Spain's infrastructure manager Adif, working with firefighters and the Spanish army, attempt to pump out the water.

During an unusually heavy shower the River Güell burst its banks and broke a small retaining wall protecting what was once the launch shaft for the TBM used to bore the tunnel under the city.

The sudden and continuous flow of water from the surface to a depth of 22m not only exceeded the pumping capacity of the tunnel equipment but also crucially flooded and consequently disabled electrical distribution boards, interrupting power to several of the pumps.

As a result, millions of litres of freshwater ran freely from the shaft, located to the south of Girona, into the northern and deepest sections of the tunnel. According to Adif estimates, no less than 30,000m3 of water inundated a 1km section of the line.

The depth of the tunnel, which descends to 40m below the River Ter, and the distance to the nearest access shafts are complicating efforts to pump the water out.

Although services from Girona to the south resumed only a few hours after the flooding, services to France remain suspended. AVE and Avant passengers can use regional trains to reach Figueres from Girona via the conventional line, while passengers travelling to and from France are forced to use buses to reach Perpignan as TGV services will not operate across the border while the line through Girona is closed.

Renfe and French National Railways (SNCF) normally operate seven international services per day: four from Paris to Barcelona and one per day on the Barcelona – Lyon, Barcelona –

There has been no indication when international services are likely to resume as Adif will only be able to assess the full extent of the damage when the flood waters have fully receded.

Paradoxically, conventional rail services have not been affected by the flooding, as the line used by these trains crosses Girona on a viaduct. Plans to close the elevated line and to replace it with an additional double-track tunnel for conventional passenger services, together with a bypass line for freight, were shelved during the recession due to the budgetary constraints.