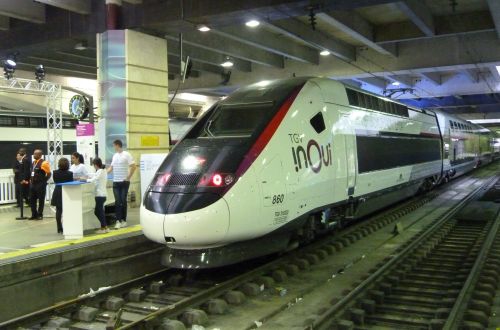 The first special TGV inOui prior to departure from Paris Montparnasse.

The first special train departed Paris Montparnasse at 08.41 and arrived in Bordeaux a couple of minutes ahead of the scheduled arrival time of 10.45.

An opening ceremony was staged in Bordeaux attended by politicians including Mr Alain Juppé, mayor of Bordeaux, transport minister, Mrs Elisabeth Borne, and Mr Nicolas Hulot, secretary of state for ecology, sustainable development and energy, as well as Mr Guillaume Pepy, president of SNCF, who said these are the ninth and tenth high-speed lines to open in France.

“I have a simple vision: TGV must remain accessible to everyone,” Borne declared. “We want to increase the number of people using rail.”

This was echoed by Hulot who said: “Transport must be available to all.”

The new lines will cut Paris - Bordeaux journey times by 1h 10min to 2h 4min while the Paris - Rennes trip time will be reduced from 2h 5min to 1h 28min.

“We will provide 5000 extra seats per day between Paris and Bordeaux with half hourly services during peak periods,” said Mrs Rachel Picard, CEO of SNCF Voyages. “Our policy is to go for volume with low prices to transform travel. Our goal is to switch 100% of air travel on this route to train.”

Picard explained that the new inOui brand will be added to the well-established TGV name to represent an enhancement of the service with new or refurbished trains and better onboard service including Wi-Fi. “We have trained 5000 personnel to provide passengers with a better service and we will train another 10,000.”

SNCF will also introduce its low-cost TGV service, Ouigo, on the Bordeaux route when the lines start commercial service on July 2. “Ouigo’s cost per seat is half that of TGV,” Picard said. “Ouigo is a way to get a big share of the low-cost market which is growing. One out of two Ouigo passengers would not have taken TGV had Ouigo not existed“We are the only railway which has been able to build a low-cost high-speed service itself,” Picard said. “Ouigo is now breaking even after three years.”

A second inaugural TGV ran from Bordeaux via Angers to Rennes on the afternoon of July 1 while a third train carrying the new French president Mr Emmanuel Macron ran from Paris to Rennes.

A full report on these two projects appears in the July issue of IRJ.