INTERNATIONAL high-speed services between Spain and France were suspended on November 30 after floodwater inundated the tunnels beneath Girona for the second time in two months. 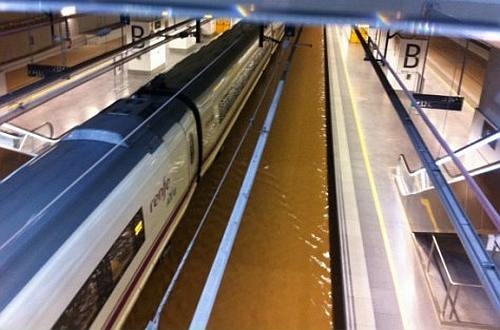 The floodwater came into the tunnel through the same open shaft, and from the same nearby river which burst its banks on September 29, pouring 40,000m3 of water into the tunnel and causing a five-day closure.

Early on December 1 Spanish infrastructure manager Adif said it was still unable to establish the full extent of the damage to lineside equipment in the tunnel or the volume of water that had poured in, but it hoped to restart services the same day.

French National Railways (SNCF) said that all the international services will remain suspended south of Figueres until further notice, with passengers being transferred to buses. The Spain-France high-speed line is operating normally between Barcelona and Girona.

The line reopened on the evening of December 1 after all the water was pumped out using the two fixed pumps installed in the tunnel plus two additional mobile pumps. At least 40 people have worked clearing debris and restoring services along the 400m section of line.