TRENITALIA's latest-generation high-speed train the Frecciarossa 1000 (ETR 1000) set a new Italian rail speed record on November 26, when one of the eight-car sets reached 389km/h during nocturnal testing on the Milan - Turin high-speed line. 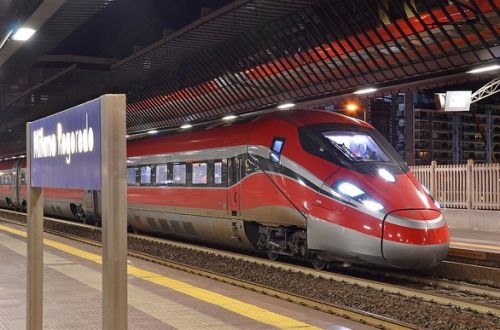 In the coming weeks the trains will be tested at up to 400km/h in order to gain certification from the Italian National Agency of Railway Safety for 360km/h operation on selected sections, a process which requires validation of operation with a 10% safety margin.

The trains are currently limited to 300km/h as this is the maximum permitted speed on the Italian high-speed network, although some sections were designed to be upgraded to 350km/h operation.

The fleet of 50 ETR 1000s is being supplied by a temporary consortium of Hitachi Rail Italy (formerly AnsaldoBreda), which has a 52% stake, and Bombardier (48%) under a €1.54bn contract awarded by in July 2010. Trenitalia's new flagship train was designed by Bertone and Hitachi Rail Italy is carrying out all project and production phases in association with Bombardier. The trains are being assembled at Hitachi's Pistoia plant.

The first six trains entered service on the Turin - Milan - Rome - Naples route in June 2015, and so far Trenitalia has received 15 trains. Deliveries will continue at the rate of two sets per month until the end of 2017. The delivery of the ETRs 1000s will enable Trenitalia to redeploy ETR 500 high-speed trains to other routes such as Milan – Venice and the Adriatic coast.

Thanks to its distributed traction, which provides an output of 9.8MW across all eight cars, Frecciarossa 1000 offers much better acceleration than its predecessor the ETR 500. Each 202m-long set seats 457 passengers, including two wheelchair spaces, with four classes of accommodation – executive, business, premium, and standard.

Operation of the trains outside Italy remains a medium-term objective for Trenitalia with Milan - Paris and Paris - Benelux open-access services considered to be the most likely options. Operation into Germany, Switzerland, or Austria is not currently planned - while the trains have passive provision for 15kV ac traction equipment this would require conversion work.

Frecciarossa 1000 is the first high-speed train to receive EPD environmental certification with CO2 emissions of 28g/km/passenger.