ITALIAN State Railways (FS) says traffic rose by 3% to 24 million journeys during the first half of 2017 on its 250 daily Frecce-branded services operated by Trenitalia comprising Frecciarossa and Frecciargento high-speed trains and Frecciabianca long-distance services. 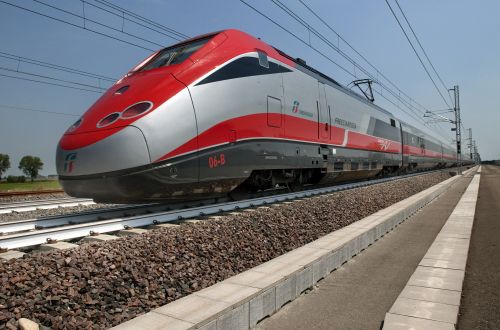 The greatest increases were recorded on the Rome - Venice, Milan - Naples and Milan - Florence - Rome high-speed routes, where Trenitalia is in competition with open-access operator NTV.

FS says both punctuality and passenger satisfaction relating to these services is improving. Between January and June, 90% of Frecce trains arrived at their destination within 15 minutes of schedule, which is a 0.5% improvement over the first half of 2016. According to the latest passenger satisfaction survey conducted by an independent company, 95.3% of Frecce passengers rated the services positively, an improvement of 1.8% compared with the first half of 2016.

FS says an average of 350 passengers per day are boarding Frecce trains at the new Naples Afragola station rising to 400 passengers on the busiest days. It also says that the load factor on its enhanced summer services to cities in southern Italy such as Taranto, Bari, Reggio Calabria and Sapri is reaching a peak of 75%.