CRRC could use the Transrapid Emsland track to test maglev vehicles. 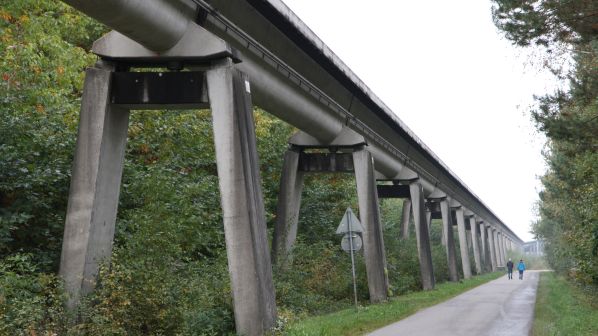 The Emsland test track could be set for a revival.
Photo Credit: Keith Fender

INDUSTRIAL Plant Operating Company (IABG), which is responsible for the former Transrapid Emsland test track near Lathen in northwest Germany, has confirmed to local media that it has been approached by CRRC about re-opening the site as a test area for CRRC’s new maglev vehicles.

CRRC has continued to develop the German Transrapid technology under license from Thyssen-Krupp. CRRC’s latest CRRC600 series maglev train will be used on the planned 400km, $US 14.1bn maglev route connecting Shanghai with Ningbo via Hangzhou in China's Zhejiang province. The Shanghai - Hangzhou project was announced in 2020 and is expected to be completed by 2035.

Demolition work at the Emsland site, which began five years ago, has largely focussed on stripping out the valuable electrical equipment for recycling; none of the test track’s concrete structures have been demolished although new electrical equipment and refurbishment of the 31km elevated test track is required if the facility is to reopen.

Potential use of the Lathen site as a hyperloop test track has also been proposed by local politicians keen to attract technology companies to the area. The basic concrete structures could potentially support a hyperloop tube if further use for maglev vehicles is ruled out.

The test circuit was built between 1980 and 1983, and used to test Transrapid maglev prototypes until 2010 with all testing ceasing in 2011. Closure followed a fatal accident that killed 23 people on September 22 2006. The later Transrapid prototype vehicles were designed for speeds of up to 500km/h and could seat 156 passengers.

Despite the German government and industry committing €850m of research and development since the late 1960s, the only commercial sale of Transrapid technology was to China for the 30km 430km/h line connecting Shanghai Pudong Airport with Longyang Road metro station to the southeast of the city centre, which opened in 2003.

Plans for an inter-city route from Berlin to Hamburg were proposed and dropped in the late 1990s. Planning work for a shorter Transrapid line from Munich Airport to Munich main station ended in 2008 causing most of the German industrial partners to drop their support and funding.