HIGH-SPEED test running started on the German Rail (DB) network on September 25 of the first of a fleet of ICx trains being built by Siemens. 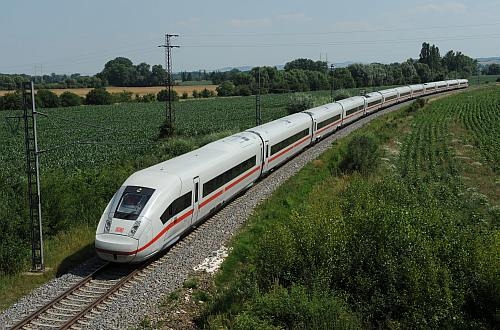 These initial trials are being conducted by DB Systemtechnik and will continue until the beginning of October. The trials with a 12-car ICx set will start at 160km/h and the speed will gradually be increased to the train's maximum design speed of 250km/h.

DB Systemtechnik will test the functioning of the bogies and the interaction of their wheels with the rails, as well as the performance of the pantograph and its interaction with the catenary.

DB ordered 130 trains from Siemens in 2011 as part of a framework contract for up to 300 trains. The initial batch, comprising 85 12-car and 45 seven-car 230km/h trains, will be used to replace locomotive-hauled coaches dating from 1971 operating on Intercity and Eurocity services.

Limited trial operation with passengers is expected to begin in mid-2016 with full service introduction of the 12-car trains scheduled for December 2017. The seven-car trains are due to enter service from 2020 onwards.

DB eventually plans to replace its oldest high-speed trains - its fleets of ICE1 and IC2 trains – with a 250km/h version of ICx.