JR Hokkaido and JR East have announced that the Hokkaido Shinkansen will open on March 26, and the two railways have also revealed the initial operating pattern for services over the 149km line from Shin-Aomori to Shin-Hakodate. 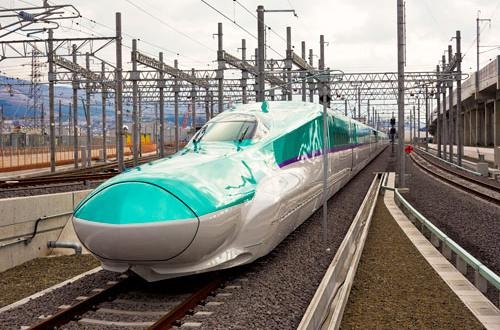 The northern terminus of the line at Shin-Hakodate Hokuto will be served by 10 express Hayabusa services from Tokyo and one per day from Sendai, together with two Hayate services, one from Morioka and the other from Shin-Aomori.
Shin-Hakodate Hokuto and Hakodate city centre will be linked by 16 shuttle services per day, most of which will be formed of three-car EMUs.

The launch of the Shinkansen will see the withdrawal of all 1067mm-gauge trains running through the 53km Seikan tunnel between Honshu and Hokkaido, including Cassiopeia, Super Hakucho, Hakucho, and Hamanasu trains.

However, to provide connections with high-speed services, Hokuto and Super Hokuto services on the conventional line from Sapporo to Shin-Hakodate Hokuto will be stepped up from nine to 12 trains per day. In the longer-term a 211km second phase of the Hokkaido Shinkansen is planned, which will extend high-speed services to Sapporo by 2030.