THE first phase of High-Speed 2 cleared its final legal hurdle on February 23 when the Hybrid Bill authorising construction received Royal Assent, becoming an Act of Parliament. 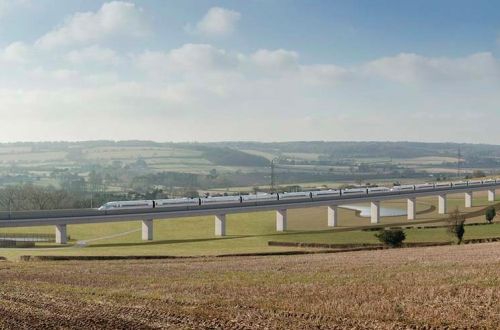 The Hybrid Bill was deposited with Parliament in November 2013 and was subsequently approved by a majority of 399 votes in favour to 42 against in March 2016. The Bill was passed by the House of Lords last month.

Preliminary works are due to begin in the spring on the 190km first phase, which will link London Euston with a new terminus station at Curzon Street in Birmingham, with a connection to the West Coast Main Line (WCML) near Lichfield for services to northwest England and Scotland.

The new railway will include two intermediate stations. Old Oak Common in west London will be an interchange with services on the Great Western Main Line and the Crossrail east-west link from Reading and Heathrow Airport to central London, Abbey Wood and Shenfield. Birmingham Interchange offer connections to regional and inter-city services as well as Birmingham International Airport and the highway network in the West Midlands.

Due to open in 2026, HS2 will initially operate on an incentivised management basis as part of the next Inter-City West Coast (ICWC) franchise, which is currently being procured.

Services will be operated by a fleet of 60 ‘classic compatible’ high-speed trains, which will be built to British loading gauge to enable use on the conventional network. The contract to supply and maintain the fleet has an estimated value of around £2.75bn and is due to be awarded by the end of 2019.

Following the completion of Phase 1, the 69km Phase 2a will extend HS2 north to Crewe in 2027. Phase 2b is due to be completed by 2033 and comprises the eastern branch to the East Midlands, South Yorkshire and Leeds, and the extension of the western branch from Crewe to Manchester, with a connection to the WCML south of Wigan.

For detailed data on high-speed rail projects around the world subscribe to IRJ Pro.