THE construction of an east-west high-speed line in northern England and acceleration of the second phase of High-Speed 2 (HS2) .are among the proposals put forward by the chairman of HS2 Ltd Sir David Higgins in a report on Britain's high-speed rail strategy, which was unveiled in Manchester on October 27. 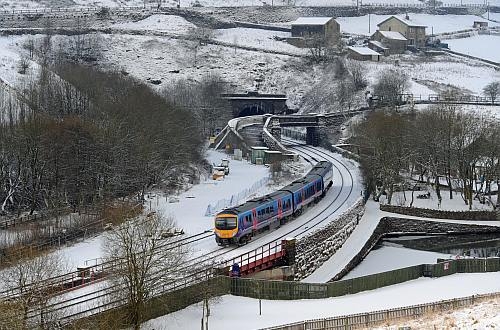 The reportnotes that typical trans-Pennine journey times could be slashed with the construction of a new line.
Photo Credit: Paul Bigland

The report, entitled Rebalancing Britain: From HS2 Towards a National Transport Strategy, makes four key recommendations for the second phase, which will extend the London – Birmingham high-speed line northwest to Manchester and northeast to Leeds. Firstly, it stresses that the strategic proposal for the second phase, is correct and constructing both branches is the only way to deliver the reductions in journey time and additional capacity that are required.

Secondly, the report suggests that the construction the East Midlands Hub station serving Nottingham and Derby, and Meadowhall serving Sheffield and South Yorkshire are the best options for delivering the benefits of HS2 to these regions. However, a number of changes are proposed to the specification for the Leeds branch of the route. Higgins says further study is needed on the location of East Midlands Hub, and the report suggests locating the station further west closer to the M1 highway and the Midland Main Line, which would provide a direct interchange with the existing line from Derby to Nottingham and Leicester.

Thirdly, it suggests that the North West Hub should be constructed at Crewe because this station is already an important interchange with good links to North Wales, northwest England and the Liverpool area. Higgins recommends further study into the possibility of running trains from HS2 onto the conventional network to serve Stoke-on-Trent, Macclesfield, and Stockport.

The report urges the government to bring the opening of the section to Crewe forward by six years to 2027, which would bring the benefits of the new line to northwest England and Scotland much sooner. Higgins also suggests bringing forward the remainder of phase 2 with the aim of commissioning the Manchester branch by March 2030 and the Leeds branch by June 2030, more than three years earlier than previously envisaged.

The fourth recommendation concerns the existing station at Leeds, which despite its recent rebuilding is forecast to reach capacity within a decade. With the arrival of HS2 and potential east-west high-speed services from Manchester, significant additional capacity will be needed nd the report suggests further work.

The capital cost of phase 2 infrastructure is expected to be £14.2bn including contingencies with a further £4.5bn for rolling stock. HS2 Ltd expects to announce a preferred route alignment next year.

The report looks beyond phase 2 and considers the prospects for a HS3 east-west link across the Pennines between Manchester and Leeds, which Higgins considers vital to Britain's economic prospects.

"If HS2 is to contribute fully to rebalancing Britain, improving the country's productivity as a whole and helping create a knowledge economy, then it must do more than meet existing market demand," he says in the report. It must also help realise potential demand, particularly by developing connectivity between east and west – a dimension which has always been poor in this country, both in the Midlands and the North where civic leaders are increasingly aware of the need to address the issue."

The report suggests the journey time between Leeds and Manchester could be cut from today's average of more than 55 minutes to 26-35 minutes depending on the option chosen, and the number of services could be doubled.

Higgins stresses that proposals for HS3 will only move forward if cities in northern England can find a way to "speak with one voice" and make a compelling case for investment. Chancellor of the Exchequer Mr George Osborne announced that the government will adopt Higgins' proposal to create a new body, dubbed Transport for the North, which is intended to bring together city councils and other regional bodies to develop a transport strategy for the region, including options, costs, and an implementation timetable for HS3. An interim report is due to be completed by next March, although with a general election scheduled for May, it is unclear how a change of government could affect the shape of these proposals.

"If done right, HS2 can provide an answer that stands the test of time and addresses the issues of congestion in the south and lack of connectivity in the north," Higgins says. "The cost and impact are issues that have to be recognised and acknowledged, but so too does the cost and impact of doing nothing. Without HS2 the people of this country will continue to face the failures of our transport system on a daily basis. With it they begin to see a strategic answer that can deliver real benefits within the foreseeable future."

the report can be viewed in full on the HS2 Ltd website (PDF).