HS2 trains contract to be awarded in October 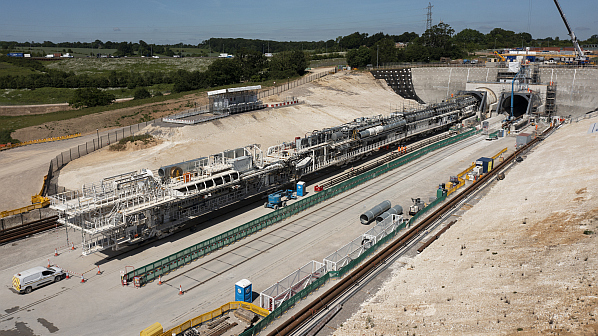 TBM Cecilia prepares to be launched at the Chiltern Tunnel in June.
Photo Credit: HS2 LTD.

THE long-awaited £2.75bn rolling stock contract for HS2 will be awarded in October according to the HS2 Ltd corporate report.

Published in late-July, the report highlights a number of key deadlines for the new London - West Midlands - Manchester line that is due to open in 2029-2033.

It states that construction will start on the Birmingham Spur viaducts that will carry the new line into the West Midlands city in September.

An Invitation to Tender will be issued for the Phase 2a design delivery partner in October (Delta Junction – Crewe), followed by the issue of an ITT for Interchange station in December. The concept design for Euston station is expected to be complete in December.

2022 will be key for the project. February should see Phase 2b Western Leg; hybrid Bill deposited in parliament. This is for the Crewe - Manchester section.

Construction of the Colne Valley viaduct is due to start in March followed by the start of tunnelling for the Northolt tunnel in April. Phase 1 land purchases will be completed that month..

The Interchange station contract is due to be awarded in July 2022 while in December the track contract should also be awarded.

Into 2023 and construction is expected to begin on Curzon Street station in Birmingham in February, although site clearance will not be finished until the following month.

The signalling systems contract is due to be awarded in May 2023 while contracts for all other rail systems are scheduled to be awarded the following month.

The start of tunnelling at Euston should begin in December 2023.

In January 2024 the major Network Rail interfaces in Inner Birmingham should be complete. Tunnelling of the Chilterns tunnel is scheduled for completion in March 2024 while the Old Oak Common site will be handed over to the Main Works Civils Contract Joint Ventures (MWCC) in May 2024.

The Eastern Leg of HS2 from Delta Junction to Leeds, connecting with the Midland Main Line, East Coast Main Line and proposed Northern Powerhouse Rail is not mentioned. This is being considered as part of the Integrated Rail Plan (IRP), which was due to have been published at the end of last year, but had not been published when the British government rose for summer recess in July.

The cost of the full network, the report states, is a range of £72bn to £98bn. So far £11bn has been spent. The funding envelope for the 225km Phase One (London - Birmingham Curzon Street) remains at £44.6bn in 2019 prices and includes additional government-retained contingency of £4.3bn as well as £5.6bn of contingency delegated to HS2 Ltd for managing the risk and uncertainties inherent in major infrastructure projects.