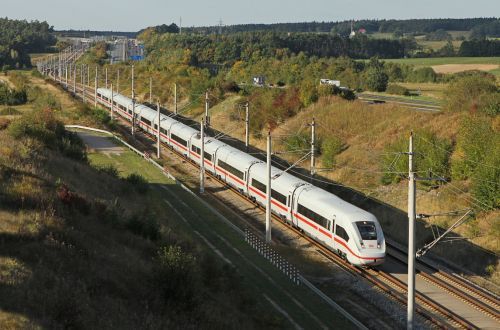 DB originally ordered 85 10-car and 45 seven-car trains in 2011, but the order was amended in 2013 so that the 10-car trains would be delivered as 12-car sets with 170 extra vehicles added to the build. At the same time, plans to order multi-voltage trains able to operate under any voltage other than 15kV 16.7Hz were dropped. The revised order comprised 100 12-car sets and 19 seven-car trains.

Trial operation of two pre-series ICE4 trains began on October 31 2016 on the Hamburg - Würzburg - Munich route. Siemens says nine trains will be in service by summer of 2018, with the entire fleet of 119 trains in operation by 2023.

ICE4 should enable DB to expand its long-distance services by 25% by 2030 and attract an additional 50 million passengers a year.

“The ICE4 is the new flagship for our long-distance routes and sets standards for our passengers: plenty of storage space for luggage, an elegant restaurant and an innovative lighting concept ensure a high level of comfort for passengers,” says Ms Birgit Bohle, chair of the management board of DB Long Distance. “This is the first ICE on which passengers can take their bicycles. Thanks to a completely revamped family area and parent-and-child compartment, we’re making journeys even more relaxing for families.”

Six of the coaches in each 346m-long 12-car set are motorised to produce an output of 9.9MW. The ICE4 fleet is equipped with ETCS to enable it to operate on the Berlin - Munich high-speed line from December 2018.

Each 12-car train has 830 seats, plus spaces for passengers in wheelchairs. Seats are designed to recline into the seat shell rather than to the rear to avoid disturbing the passenger sitting behind. First-class seats have electric power sockets and reading lamps. Electronic reservation signs and seat numbers are integrated into the seat headrests. Up to eight bicycles can be accommodated in one of the end cars.

The on-board Wi-Fi connects with the fastest data network available, either LTE or 3G, and bundles the capacity of the network operator so that higher data volumes can be processed to provide passengers with a faster and more stable connection.

A new type of air-conditioning system has been installed which can cope with outside temperatures ranging from minus 25oC to a plus 45oC. The system is also redundant, so that one section will continue to operate if the other shuts down.