THE long-awaited launch on December 9 of Fyra high-speed services between Amsterdam and Brussels using AnsaldoBreda V250 trains may be delayed. 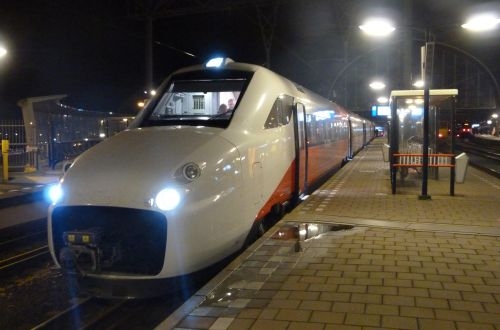 V250 trains are currently operating on the Amsterdam - Breda route.

Even though the national safety authorities in the Netherlands and Belgium have granted permission to operate the train to the two operators, the Dutch High Speed Alliance (HSA) and the Belgian National Railways subsidiary SNCB Europe, the recently-reappointed Dutch minister of infrastructure, Mrs Melanie Schulz van Haegen-Maas Geesteranus has rejected an amendment to the contract between HSA and SNCB Europe as it does not comply with the terms of the Dutch high-speed concession granted to HSA.

According to the concession for the operation of services on the HSL-South high-speed line in the Netherlands, there must be 16 Fyra trains per day between the Netherlands and Belgium. HSA is allowed to start with just 10 services per day, but is obliged to increase the frequency up to 16.

The dispute centres around the planned introduction of a Fyra service between The Hague, Breda and Brussels, which HSA is obliged to operate. As HSA does not want to operate services in Belgium alone, it was planned as a joint venture with SNCB Europe. But SNCB Europe claims the service would be loss making, and sought a bank guarantee from the Dutch state, but this was rejected. However, it is difficult to see how this service can ever be introduced, as SNCB was supposed to order a fourth V250 train, making a common fleet of 20 sets, but AnsaldoBreda has dismantled the production line. While the Dutch infrastructure minister recognises this, she insists that a service must be introduced between  Breda and Belgium as a minimum, otherwise she will veto the start of the Amsterdam – Brussels Fyra operation.

If the dispute cannot be settled before the start of the new timetable on December 9, SNCB plans to run an hourly-interval shuttle between Brussels and the Dutch border station of Roosendaal, with a connection to Amsterdam. The existing Amsterdam – Brussels conventional service is scheduled for withdrawal as part of a major timetable reorganisation in the Netherlands connected with the opening of the Hanze line between Lelystad and Zwolle.