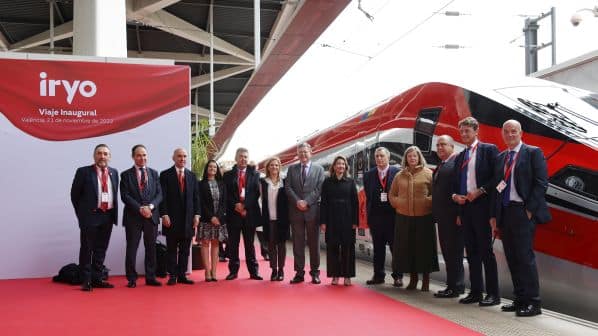 SPAIN’s first private high-speed operator Iryo began carrying fare-paying passengers on November 25, when it launched a service of 12 trains a day each way on the Madrid - Zaragoza - Barcelona route.

The first service departed from Madrid Atocha at 06.45, with the first Iryo train leaving Barcelona Sants at 07.05. The fastest non-stop journey time between the two cities is 2h 30min.

Prior to the launch of commercial services, Iryo had made an inaugural run from Madrid to Valencia on November 21. Onboard the Frecciarossa 1000 train were minister of transport, mobility and the urban agenda, Ms Raquel Sánchez, and president of Spanish infrastructure manager Adif, Ms María Luisa Domínguez, as well as over 100 business leaders and other stakeholders.

Following its launch on the Madrid - Zaragoza - Barcelona route, on December 16 Iryo will start operating from the Spanish capital to Cuenca and Valencia.

Services will also be extended from Madrid to Córdoba, Antequera, Málaga and Seville on March 31. The Iryo network will be completed on June 2 with the start of operations on the Madrid - Albacete - Alicante route.

Iryo is the first private operator to enter the Spanish high-speed market. Its majority shareholder is Trenitalia with a 45% stake, with 31% held by Operador Ferroviario de Levante (OFL), a subsidiary of Spanish regional airline Air Nostrum, and the remaining 24% by Globalvia.

The new entrant says it will offer passengers “the best journey experience in the railway sector,” with a fleet of 20 Hitachi Frecciarossa 1000 trains offering four classes of accommodation tailored according to customer needs.

These range from the basic Inicial to the Singular, Singular Only You and Infinita classes aimed at the business and first-class markets. All seats offer plug and USB sockets, free onboard Wi-Fi and 5G connectivity.

Iryo also hopes to set itself apart from the competition with Haizea, its own onboard catering brand which offers freshly-prepared food including seasonal produce and healthy options, as well as premium drink brands and a changing wine list selected from Spain’s premier producers.

Passengers with Iryo tickets will be able to travel free of charge on Spanish National Railways (Renfe) suburban services in the cities the new high-speed operator serves.

Iryo has also signed a code share agreement with Air Europa to offer combined air and rail tickets, as well as a worldwide distribution agreement with Amadeus. Iryo is a full member of International Air Transport Association (IATA) and is continuing to work on new strategic agreements.

“Iryo, Ouigo of France and Renfe of Spain are already competing on an equal basis on the Spanish rail network, within the framework of the liberalisation process recently undertaken by our country, which has made is us the first on the continent to have three top-level companies providing high-speed services,” say Sánchez.

“Today is a great day for the Spanish liberalisation process as Iryo has made its maiden voyage,” says Iryo president, Mr Carlos Bertomeu.

“I feel that this journey began a few years ago when we started to devise what the new mobility should be, and, after months of intense work, this project has become a reality. Personalisation, flexibility, sustainability and integral design are now part of mobility in Spain.”

Trenitalia CEO, Mr Luigi Corradi, says that the launch of Iryo was “the result of the coming together of Italian and Spanish experience in high speed and customer service.”

“It is a source of pride for me and for Trenitalia to see the Frecciarossa 1000 about to run between the country's main cities.”

An interview with Iryo CEO, Mr Simone Gorini, will appear in the December issue of IRJ.