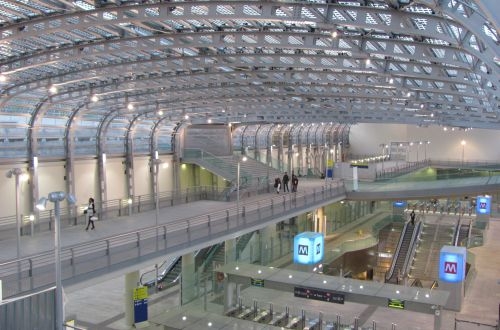 Interior of Porta Susa looking down to the interchange with the metro.

The station, which will be served by both Trenitalia and NTV high-speed services as well as conventional trains, is covered by a spectacular 386m-long and 30m-wide glass and steel roof. There are four main areas: the underground platforms; an area comprising a ticket office, waiting rooms, and passenger information system; a commercial area; and connections to the metro, bus services, and car parks.

The station features an eco-friendly heating and ventilation system. The glazing skin is equipped with mono-crystalline photovoltaic cells installed between the two layers of glass which act as a sun shield and will generate 680,00kWh of energy a year. The glazing sheets are designed to allow an exchange of air between the inside and outside the building, which is cooled by natural air convection rising from the lowest level. Radiant floor panels in the passenger waiting area inject heat in the winter and help to cool the building in summer.