ITALIAN private high-speed operator Italo-NTV suspended most of its services across the country on November 10 following the reintroduction of nationwide measures to limit the spread of Covid-19. 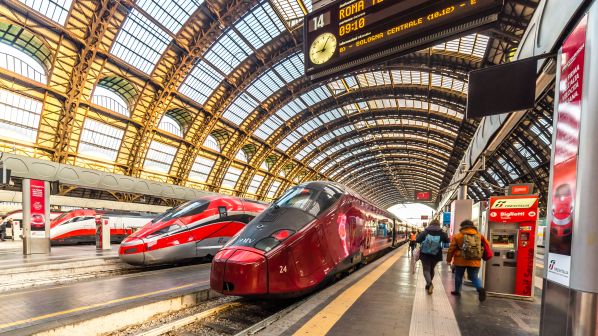 Italo-NTV is only operating six Naples - Milan - Turin and two Salerno - Rome - Venice trains every day, down from the 112 daily services operated before the pandemic. The current timetable is scheduled to run until December 12.

The operator has also been forced to lay off around 1300 staff.

This follows a 90% drop in passenger numbers as restrictions were reimposed on inter-regional travel. Onboard capacity has also been restricted to 50% of normal levels in order to allow social distancing.

Italo-NTV president, Mr Luca Cordero di Montezemolo, told Italian newspaper Corriera della Sera at the end of last month that while the government had promised to provide €1.2bn in support over 15 years for freight and high-speed rail services, it was yet to receive any of the funding.

“At this point, if the promised funds do not arrive in a very short time, Italo will be forced to stop,” he said.

However, minister of infrastructure and transport, Mr Paola De Micheli, responded by saying the decree providing the funding had been signed. “The resources will certainly arrive,” he told news programmme Rainews24.

Italo-NTV only ran one round trip per day between Salerno, Rome and Venice during the height of the first wave of the pandemic, but reinstated some services on May 16 and again on June 3.

National operator Trenitalia has also been forced to cut back services, announcing earlier this week that it would only operate 67% of its Frecciarossa high-speed services. This could be further cut back to around 50% and eventually 28%, says Trenitalia CEO, Mr Orazio Iacono.