Minister says cost overrun is due to unstable civil works. 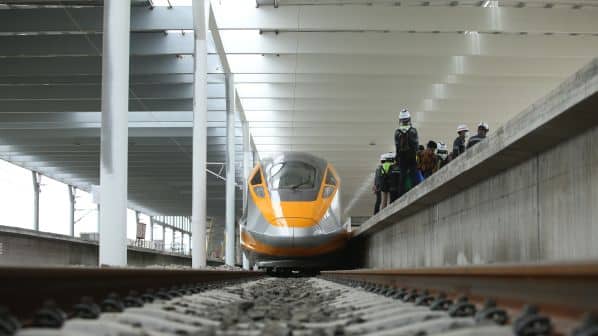 THE high-speed between Jakarta and Bandung will be opened in mid-2023, says Indonesia’s coordinating minister for maritime affairs and investment, Mr Luhut Binsar Pandjaitan.

According to Pandjaitan, dynamic testing on the new line is due to start on November 16.

That date is the second day of the G20 leaders’ summit that Indonesia is hosting in Bali, as holder of the current presidency of the group of the world’s 20 largest economies representing 80% of global GDP.

“From June to July next year, we will have commissioning," Pandjaitan said.

The minister also said that cost overrun issues on the 142km project, which is $US 2bn over budget according to construction consortium PT KCIC, had been resolved and were due to technical issues and the unstable nature of civil works in particular.

“A lot of cost overrun is due to land damage. It is shaking,” Pandjaitan said. “I think three tunnels have been disturbed, but I think (the work on) it is finished now.”

Last month, Indonesia’s president, Mr Joko Widodo, said that poor soil conditions had delayed the completion of tunnels 2 and 11 on the high-speed line, and that these problems had been resolved.

"The soil condition is very delicate, and praise be to God, the issue has now been addressed," Jokowi said.

He noted that work on the project was 88.8% complete and that the high-speed line between Jakarta and Bandung was expected to enter service by June 2023.

The route is designed for a maximum speed of 350km/h and will cut the journey time by rail from Jakarta to Bandung from three hours to 40 minutes.

Considering the proposed extension of the high-speed line to Surabaya, Pandjaitan said that this would cut the journey time from Jakarta to Surabaya to four hours, and would improve Indonesia's economic efficiency.

It is not clear at present, however, if the Surabaya extension project would be funded and delivered in the same way as the Jakarta - Bandung high-speed line.

Indonesia’s first high-speed line is being built by the PT KCIC, 60% of which is held by Indonesian state-owned companies including Wijaya Karya and PT KAI.

China Railway Engineering and other Chinese companies hold the remaining 40%. The project is being funded by a loan from China Development Bank.