HIGH-speed services began operating through the 53.8km Seikan tunnel between the Japanese islands of Honshu and Hokkaido on March 26, with the launch of commercial services on the Hokkaido Shinkansen from Shin-Aomori to Shin-Hakodate-Hokuto. 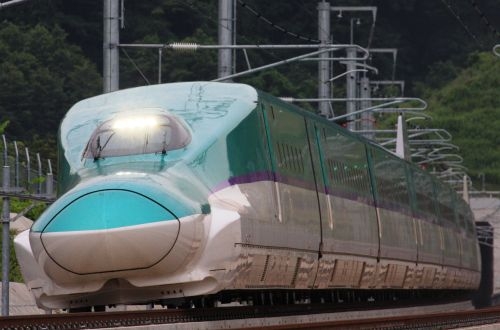 The Yen 550.8bn ($US 4.84bn) project was approved by the Japanese government as long ago as 1973, but work was suspended in September 1982 due to the poor state of the economy and Japanese National Railways' mounting debts.

JR Hokkaido operates services on the line using a fleet of four series H5 trains built by Hitachi and Kawasaki Heavy Industries. The trains are based on JR East's series E5 Shinkansen trains and are maintained at a purpose-built depot at Hakodate, near Shin-Hakodate-Hokuto. The 10-car 320km/h sets are 253m-long and accommodate up to 731 seated passengers, including 18 in Gran Class and 55 in Green Car.

Shin-Hakodate-Hokuto is served by 10 express Hayabusa services from Tokyo and one per day from Sendai, together with two Hayate services, one from Morioka and the other from Shin-Aomori. A shuttle service operates on the 19.9km 1067mm-gauge line between Shin-Hakodate-Hokuto and Hakodate city centre.

The fastest Hayabusa services complete the 862.5km trip between Tokyo and Shin-Hakodate-Hokuto in 4h 2min. Hayabusa takes 2h 59min to cover the 713.3km between Tokyo and Shin-Aomori, where there is a two-minute stop to change drivers. The remaining 148.8km to Shin-Hakodate-Hokuto is covered in 1h 1min, with trains running at a maximum of 140km/h on 82km of the route.

With the launch of high-speed services, all 1067mm-gauge passenger services through the Seikan Tunnel, including Cassiopeia, Super Hakucho, Hakucho, and Hamanasu trains have been withdrawn.

A full technical description of the new line can be viewed here.