JR East and JR West reopened the Nagano - Kanazawa section of the Hokuriku Shinkansan, which was damaged by Typhoon Hagibis earlier this month, on October 25, albeit with a reduced frequency. 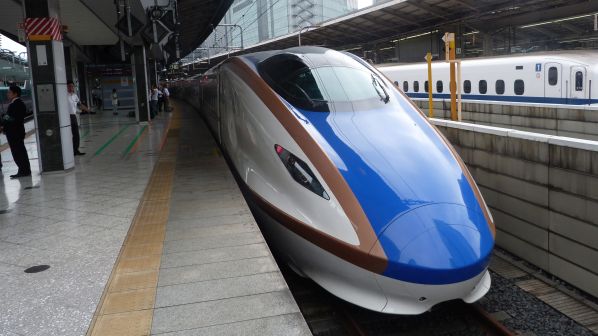 The two railways are operating eight fewer trains than normal on the Tokyo - Kanazawa route and are running two round trips per day between Tokyo and Takasaki using Joestsu Shinkansen trains to partially compensate. This is because 10 Hokuriku Shinkansen trains, representing one third of the fleet, were damaged when the depot in Nagano was flooded.

However, JR East says it is unable yet to confirm the schedule for a few trains on the Hokuriku Shinkansen after November 30 due to uncertainty about progress with the repairs to the damaged trains.

Operation of the Chuo Main Line was also partially suspended due to Typhoon Hagibis, JR East says restoration of the inbound line between Takao and Sagamiko is on schedule, and services will resume as normal on October 28.

However, services remain suspended on 11 lines and partially suspended on another two lines across the JR East network while repairs continue following Typhoon Hagibis.

The Hachinohe Line, for example, suffered damage to embankments and other structures in 23 locations which is expected to take about two months to repair.