IRJ at the UIC High-Speed Rail World Congress, Tokyo: THE prime minister of Japan, Mr Shinzo Abe, addressed the 1200 delegates attending the opening session of the ninth UIC world congress on high-speed rail which opened in Tokyo on July 7. 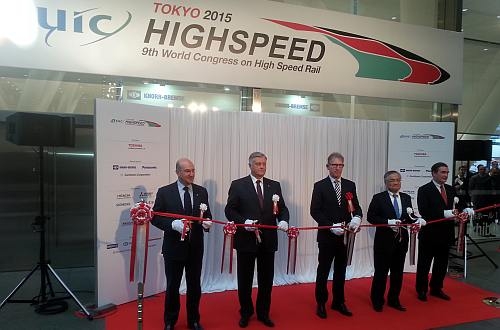 In his speech, Abe reflected on 50 years of Shinkansen development, recalling that in the early 1960s many questioned the value of building a high-speed rail network in Japan. "They said 'surely this is the age of the automobile and the jet plane?' The Shinkansen is now carrying 10 times more passengers than when it opened in 1964, while the GDP of Japan has also increased by a factor of 10. Without the Shinkansen we would not be living in the ecological environment we have today."

Mr Vladmir Yakunin, UIC chairman and president of Russian Railways (RZD), stressed that high-speed rail has a continuing role to play in stimulating economic growth. "The global economy is in a state of stagnation," he told delegates. "Investment in infrastructure is one of the major instruments to cope with this. High-speed rail brings new jobs, increased mobility, and helps to develop the regions through which it passes, just as new railways did in the past.

Yakunin's message was echoed by Mr Tetsuro Tomita, president and CEO of JR East, which is hosting the congress, who argued that high-speed rail can play a key role in helping to develop national economies.

Mr Zhao Guotang, deputy chief engineer of Chinese Railways Corporation, explained that high-speed lines have now been built in all climates and terrains in China, demonstrating the adaptability of the technology. China now operates more than 16,000km of high-speed lines and the network carried 2.32 billion passengers in 2014. The Beijing - Shanghai line now carries 100 million passengers a year and is profitable after only three years of operation.

Mr Michele Elia, UIC vice-chairman and CEO of Italian State Railways, called for the lack of interoperability to be addressed urgently to encourage the development of international services.

Dr Choi Yeon Hye, president and CEO of Korail, added that the most urgent challenge is to increase standardisation. "We need to establish an expert group to standardise technology and systems," she said. "Korail is willing to participate in such a group."