CENTRAL Japan Railway Company (JR Central) confirmed on October 22 that it will receive a further 20 N700A series Shinkansen trains between fiscal 2016 and fiscal 2019 to replace the last of its remaining 700 series sets, which will be withdrawn by the end of the decade. 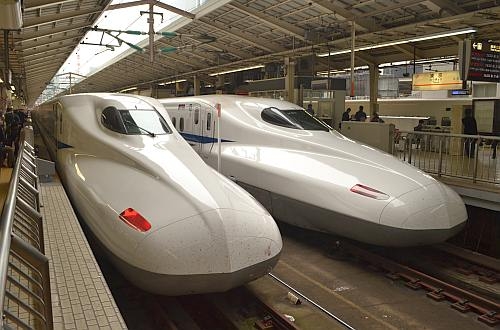 The first of the extra trains will be delivered in the 2016 financial year, with seven sets following in 2017, seven in 2018, and the final five trains during the 2019 financial year, which ends in March 2020.

The 300km/h trains are outwardly similar to the series N700, but feature a number of technical improvements over their predecessors, including LED lighting (which is around 20% more efficient than the lighting system in the N700), bogie vibration detection, enhanced ATC, and improved brake discs which reduce braking distances by up to 10%. Sound absorption panels, used only in Green Car vehicles on the N700, are used throughout the 16-car N700A, which seats 1323 passengers.
In 2013 JR Central began incorporating a number of improvements from the N700As into the N700s and the remainder of the N700 fleet -a total of 111 trains - will also be upgraded to this standard. JR Central says the total investment in upgrading the N700s and purchasing additional N700As amounts to around Yen 104bn ($US 866m).

The N700A retains the 1o tilting system introduced on the N700, which allows operation at up to 285km/h on the Tokaido Shinkansen and 300km/h on the Sanyo Shinkansen.

The trains also feature a new cruise control system, known as the fixed speed running device, which receives data on gradient and curvature from trackside transmitters installed along the Tokaido Shinkansen, allowing the train to automatically adjust power output according to the infrastructure characteristics of the route.

The first N700As entered service in February 2013, replacing series 700s on Tokyo – Osaka services. JR Central says energy consumption is 19% lower on the N700A than on the series 700.

JR Central received 91 700 series trains between 1997 and 2006, around 70 of which remain in service, although the fleet is steadily being reduced as more N700As are delivered.