PRESIDENT Park Geun-hye of Korea along with 1200 invited guests and members of the public attended a ceremony at Songjeong station in Gwangju on April 1 to mark the opening of the new 182.3km high-speed line from Osong to Gwangju. New KTX Honam services from Seoul to Mokpo will begin using the line on April 2. 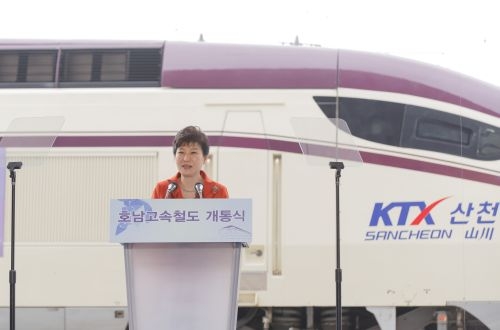 Osong is located on the existing Seoul - Busan high-speed line and the new line will reduce journey times between Seoul and Gwangju by 1h 6min from 2h 39min on existing infrastructure. The new line is part of the Korean government's agenda to connect all of its major cities within half a day's travel of one another.

Work on the project, which was budgeted at Won 10.24 trillion ($US 9.28bn), began in 2009 and was entirely funded by the Ministry of Transport and Infrastructure. The line includes new stations at Namgongju, Iksan, Jeongeup, Gwangju-Songjeong, while services will continue to Mokpo on existing infrastructure.

Park said the new line will provide a major economic boost to Jeolla Province and the southwest of Korea.

Services on the new line will utilise 22 Honam KTX trains supplied by Hyundai Rotem under a contract signed in 2011. The new trains have 410 seats compared with 363 on the KTX Sancheon, Hyundai Rotem's previous high-speed train platform. They also feature enhanced braking systems. Testing of the first 15 trains began in November 2013 and these sets were delivered to Korail at the end of 2014 and early this year. Delivery of the remaining seven sets is expected to take place over the next few months.

Park said she hopes the KTX Honam project will provide a springboard for Korean companies to sell their equipment abroad.

"It is time to make inroads in the global railway market worth Won 200 trillion," she said.

For more on plans to develop new railway infrastructure in Korea see the August 2014 edition of IRJ p29, or click here.