Last-minute deal clears the way for Fyra services to Brussels

JUST six days before the first trains were due to run, the Dutch government and Belgian National Railways (SNCB) have finally settled their long-running dispute over the launch of Fyra high-speed services between Amsterdam and Brussels, clearing the way for the launch of commercial operations on December 9. 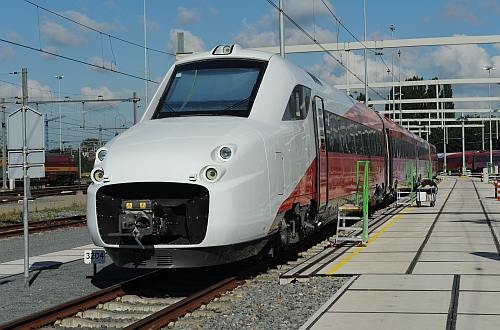 The breakthrough came after the Netherlands' newly-appointed secretary of state for infrastructure, Mrs Wilma Mansveld concluded an agreement with the High Speed Alliance (HSA) and Belgian National Railways subsidiary SNCB Europe for a service between Breda and Belgium using AnsaldoBreda V250 emus.

From April 8 Fyra will operate eight times per day between Antwerp and Breda, with an intermediate stop at Noorderkempen, in Belgium. Supplements and reservations will not be required for this service, which will be supported by the Dutch government with an annual subsidy of €2.5-3.5m. However, the subsidy must cover both the Antwerp – Breda Fyra service and cross-border regional trains between Roosendaal and Antwerp.

SNCB plans to reduce the journey time of the all-station service between Roosendaal and Antwerp by five minutes in December 2013. The journey time influences the financial support given to this service by the Dutch authorities.

The Dutch government has recognised that a direct Fyra service between Brussels Midi and The Hague Central, including an intermediate call at Breda (where the train would reverse), is not financially viable, meaning that passengers travelling between the two cities will need to change trains at Rotterdam Central. Nonetheless, passengers will still benefit from a 29-minute saving as the journey time falls to 1h 44min.

As the Dutch Ministry of Infrastructure has dropped its demand for a direct service between The Hague and Brussels Midi there is no need for SNCB to order a fourth V250 set, an impossible requirement as AnsaldoBreda has dismantled the production line.

Previously the Belgian minister of public companies had ordered SNCB to acquire this train, which would take the overall fleet to 20 sets, but SNCB refused to comply. In light of the latest agreement, the Dutch government has withdrawn the legal proceedings against SNCB, based on the violation of the contract and agreement signed in 2005.

With these issues resolved, V250s will begin running between Amsterdam and Brussels on December 9 with a journey time of 2h 01min, shaving 55 minutes off the timings for the current Benelux service, which will be withdrawn. However, passengers using the new service must have a Fyra ticket and reservations are compulsory, unlike the Benelux service, and fares will also rise considerably.