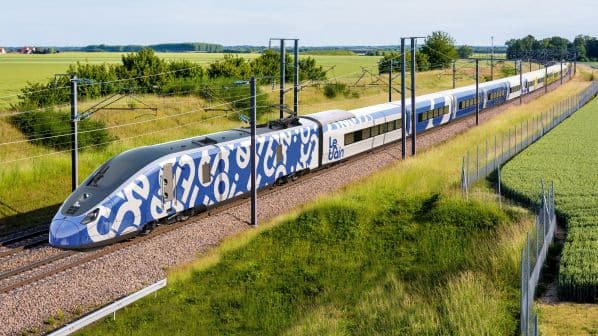 French private high speed operator Le Train has signed a contract with Talgo for an initial order for 10 of its Avril EMUs.
Photo Credit: Le Train

FRENCH new entrant Le Train, which received its operating licence to become the first private high-speed operator in France in December 2022, has signed a contract with Spanish manufacturer Talgo for the supply of 10 Avril single-deck high-speed trains.

The contract with Talgo is believed to be worth around €300m and includes 30 years’ spares and maintenance. It follows Le Train’s failure to secure second-hand TGV Atlantique trains from French National Railways (SNCF) and a subsequent EU-wide tendering process for new trains undertaken during 2022.

The trains will be built at Talgo’s plant at Rivabellosa in northern Spain and there are options for more trains to be supplied over a 10-year period. The deal also covers the creation of a joint research and development unit in the French region of Nouvelle-Aquitaine.

Le Train says it has chosen Talgo’s Avril design for its level-floor accessibility, low energy consumption and because it offers dedicated spaces for up to 40 bicycles and for leisure equipment such as surfboards. The trains will have around 350 seats, which is considered sufficient for the regional passenger market Le Train aims to serve.

Le Train was founded in 2020 with the aim of operating regional high-speed services between stations in western France, filling a niche market which SNCF is not currently serving.

Le Train’s services will run over the high-speed line from Bordeaux to Tours, which is managed by the private company Lisea, with which Le Train has negotiated lower access charges aimed at encouraging new services. This development is said to be a major advantage as track access charges can represent around half of a train operator’s costs.

Some of Le Train’s services will serve the southwestern cities of Angoulême and Poitiers, and will call at the Loire Valley cities of Saumur and Angers en route to Nantes and Rennes in Brittany. The coastal cities of La Rochelle and Arcachon are other destinations that Le Train has in its sights and the company says that it plans to employ 150 people in a variety of roles once services begin.

Although the company’s initial forecast was that its services would begin in December of this year, it now appears that December 2025 is more likely - unless Le Train finds an alternative supplier of second-hand rolling stock other than SNCF - as the first of the Talgo Avril trains, construction of which will begin early this year, is due for delivery in early 2025.

“With this major agreement, we confirm our ambition to offer high-speed daily trips to the millions of inhabitants of the Nouvelle-Aquitaine, Brittany, Pays de la Loire and Centre-Val de Loire regions,” says Le Train director general, Mr Alain Getraud. “The custom design proposed by Talgo will allow us to develop a unique experience for the traveller, especially for the transport on board of leisure and sports equipment, such as bicycles and surfboards.”

“This is a great opportunity for our company to deploy its knowledge and innovations north of the Pyrenees,” says Talgo patents president, Mr Carlos Palacio Oriol. “We are convinced of the relevance of the Le Train model to make rail transport a true lever of ecological transition.”

In a separate development, the first Avril train owned by Spanish national operator Renfe started tests in France during December 2022. Renfe reportedly intends to use Avrils on the direct Barcelona - Paris services it relaunched last month as soon as the Avril design receives authorisation.